Scarborough Hits Back at Krugman’s ‘Shrill Attack’ over Census Numbers 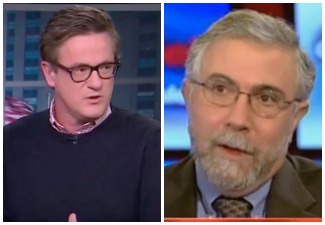 Paul Krugman swiped at Joe Scarborough today with a blog post calling him (though not by name) an “Obamacare truther” promoting the “vile” idea the White House is using the census to cook the books. Scarborough fired back in an e-mail to POLITICO, saying he just “laughed” at Krugman’s piece when he saw it.

Scarborough called the White House decision to change health care census questions a “clumsy effort” at trying to “cook the books” on their part. In response to Krugman’s post, Scarborough mainly invoked a debate the two had last year to just laugh at the New York Times columnist.

“I guess the Nobel Prize winning professor hasn’t gotten over being embarrassed in his economics debate against an Alabama grad who read Sports Illustrated in the back of my Econ 101 classes… Paul’s shrill attack is off target and wrong, as usual. I just hope the good professor can work through the humiliation of his debate performance against me and will soon stop being driven to post silly attacks because of his feelings of inadequacy. I’m pulling for him.”

Scarborough is referring to a debate he and Krugman had on Charlie Rose‘s show last year, a debate that Krugman later admitted was a “Denver moment” (referring to President Obama‘s infamously bad first debate in the 2012 election). You can watch highlights from that debate below: