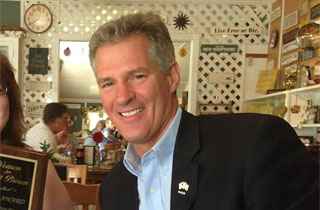 The job of Guardian reporter Paul Lewis is to ask politicians questions about their views on current events and policy. The job of Scott Brown, US Senate Candidate, is to answer those questions to the best of his ability. But when Lewis attempted to get clarification from Brown about his vague response to the Hobby Lobby ruling, Brown attempted to evade him in a rather dramatic fashion.

As context: Brown, who’s running in New Hampshire, lost his Massachusetts Senate seat to Elizabeth Warren, and one of the reasons he lost was the revelation that he voted for the controversial Blunt amendment, which would have allowed employers to opt out of women’s birth control coverage on religious and moral grounds — a step further than even Burwell v. Hobby Lobby dared to go.

Naturally, given the fact that the Blunt Amendment was so prominent in Brown’s 2012 campaign, it would make sense that a reporter would question him about his views on women’s health issues, because Hobby Lobby was decided less than a month ago. But as Lewis learned twice, Scott, who only released a tepid two-sentence statement that vaguely addressed the ruling, was really not interested in answering that question.

The first incident came during a public campaign event, where Brown was shaking hands with voters at a New Hampshire diner:

I found Brown at a table at a restaurant called Priscilla’s, introduced myself as a Guardian reporter and enquired if I could ask him some questions. Brown smiled nervously and replied: “What do you want to ask me about?”

“Hobby Lobby? That would be a start,” I said.

“I’m all set,” he replied. “We’re enjoying ourselves right now.”

“But you’re standing for Senate. It is routine for journalists to ask you questions and usually the candidates answer.”

“Not without notifying my office.”

Brown stood up, walked to the back of the diner, and took shelter in the bathroom. A campaign aide, Jeremy, looked bewildered. He lingered beside me for a few moments, before politely excusing himself – “Nice to meet you” – and joining his boss in the bathroom.

Then, Scott pulled a move akin to Lindsay Lohan leaving the Chateau Marmont, except instead he was leaving a diner:

I decided to wait in the parking lot for Team Brown to emerge into the sunlight. Four minutes later, a white SUV swung round and parked next to the steps of the diner. Brown came out with a phone pressed to his ear. “Get in! Get in!” said a campaign worker holding open the car door. Another man asked me to leave. “You’re getting in the face of people that don’t care to talk to you,” he said.

The second time that Lewis found Brown at a public campaign event, Brown himself called the reporter “unprofessional and rude,” and a member of Brown’s team actually called the cops on the journalist:

I don’t know if Officer Valley, from the Ossipee Police Department, had ever before been called to deal with an errant reporter. I do know he walked up to the porch with an amused look on his face. “How you doing?” he said, shaking everyone’s hand. “What’s up?”

None of the parties disputed the facts of the case. I was the journalist. My job was to ask questions. The man holed up inside the tavern was Scott Brown, a would-be senator who didn’t want to answer. I was eventually asked to leave. I left.

Officer Valley mulled over the situation before delivering his summary judgment. “There’s no crime,” he said. “No issue here at all.”

“We’re used to politicians giving us evasive answers,” Lewis noted. “But we don’t expect them to run away from questions — unless, that is, they’re in crisis mode.”

[The Guardian]
[Image via Scott Brown for Senate/Facebook]