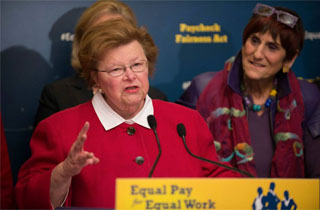 Sen. Barbara Mikulski (D-MD), the longest-serving woman in Congress, will reportedly retire after over 38 years as both a Representative and a Senator.

According to their sources, NBC News reported that Mikulski, 78, would serve out the remainder of her term, which ends in January 2017. Mikulski, who joined the Senate in 1987 and paved the way for the 20 women who currently are her colleagues — the most women who have ever served in the Senate — is currently the ranking member of the powerful Appropriations Committee, serving as Chairman when the Democrats controlled the Senate.

With her retirement, 2016 just got a lot more interesting in Maryland, which teeters between blue and red:

[Maryland] is home to powerful politicians who could decide to run for Mikulski’s seat. On the Democratic side, House Minority Whip, the second highest Democrat in the House, Steny Hoyer, represents the state as does Rep. Chris Van Hollen, who is the top Democrat on the House Budget Committee and a member of House Leadership. Rep. Donna Edwards, the first African American woman from Maryland elected to the House is a possibility so is Anthony Brown, former Lt. Governor, who surprisingly lost the race for governor in 2014 in what became a bad year to run as a Democrat, has statewide appeal. Baltimore Mayor Stephanie Rawlings-Blake could consider a run, too, as could Heather Mizeur, former Member of House of Delegates and former candidate for Maryland governor.