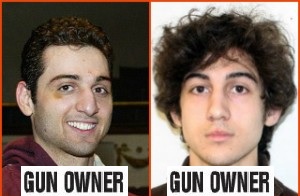 The coverage of the Boston Marathon bombing has been a banquet of jumping to conclusions before all of the facts are in, with a side-order of peripheral attempts to connect the tragedy to unrelated political issues. There is one such connection, however, that is undeniable: days after the bombing, the Republicans in the U.S. Senate voted to defend the rights of the Boston bombers to legally purchase firearms, including assault weapons and high-capacity magazines, and including the weaponry that was used to kill one police officer, and wound another, during last week’s manhunt.

I know what you’re thinking. There’s still so much we don’t know about the bombing suspects, and that’s true. Early reports indicate that deceased suspect Tamerlan Tsarnaev was questioned by the F.B.I., and that he was arrested for domestic violence in 2009. The suspect in custody, Dzhokhar Tsarnaev, was a U.S. citizen, and wasn’t old enough to legally purchase handguns in Massachusetts, where a License to Carry is required to buy handguns. There have even been erroneous reports that the specific guns used by these suspects were not purchased legally, based on an Associated Press report that says the two suspects weren’t licensed to carry:

Cambridge Police Commissioner Robert Haas tells The Associated Press in an interview Sunday that neither Tamerlan Tsarnaev (tsahr-NEYE’-ehv) nor his brother Dzhokhar had permission to carry firearms.

He says it’s unclear whether either ever applied and the applications aren’t considered public records.

But he says the 19-year-old Dzhokhar (joh-KHAR’) would have been denied a permit because of his age. Only people 21 or older are allowed gun licenses in Massachusetts.

While carry permits are required to purchase handguns, a Firearms Identification would have allowed either of the brothers to purchase non-large capacity rifles, shotguns and ammunition, but none of that really matters. Either of these two could have gone to northern neighbors Vermont or New Hampshire, where gun laws are next to nonexistent, to purchase them legally, without a background check. It is still not known where, or how, these suspects purchased their firearms, or whether either of them could have passed a background check, but that doesn’t matter. These suspects are presumed innocent until proven guilty, but that doesn’t matter, either.

None of it matters, because by defeating the Manchin/Toomey background check bill (the law that Senate Democrats voted in sufficient numbers to pass, that Senate Republicans blocked with a filibuster and 42 votes), Senate Republicans preserved the right of any person, be they convicted terrorist, serial domestic abuser, or strait-jacketed mental patient, to purchase firearms without a background check. We do not know, yet, if the Boston bombing suspects purchased their guns legally, but we know that they could have, and so will the next fugitive terrorists be able to.

This would be too obvious to even mention if not for the fact that people like Fox News’ Chris Wallace and Arkansas State Rep. Nate Bell (R) decided to draw the Boston bombing into the gun reform debate by musing that residents of the Boston area might have appreciated having guns in their homes while the remaining suspect was at large. Nothing in any of the proposed gun measures would prevent any law-abiding people from having more than enough firearms in their homes to repel Dzhokar Tsarnaev, but had they been in place, might have prevented the suspected bomber from acquiring those weapons. They might prevent the next terrorist or mass murderer from obtaining the weapons they need, or at the very least, force them to acquire them illegally. That gives law enforcement one more opportunity to catch them before they hurt people.