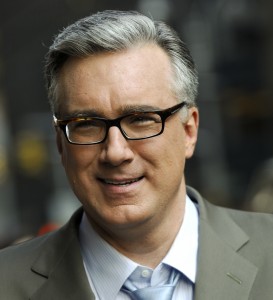 Friday night’s shocking announcement that Keith Olbermann was immediately leaving MSNBC has had an interesting effect on both detractors and supporters. Right of center media outlets appear to a have embraced a measured yet celebratory tone, while those on the left have called it an “end of free speech,” and have begun to hypothesis what could be Olbermann’s next steps. Some enterprising members of the left wing DailyKos website have begun a DraftOlbermann campaign for the Connecticut Senate seat soon to be vacated by Joe Lieberman. Hey if Linda McMahon can run…

Started by DailyKos contributor who goes by the moniker “Stranded Wind,” the movement is still very much in its infancy, and is likely to be seen as delusional by its detractors. Still, its a rather impressive reaction that says more about the loyal following that Olbermann engendered from the DailyKos, even if detractors are certain to portray this as a joke, or if there is realistically very little chance for a potential senate run.

The thinking is summed up “He is, however, just old enough, smart enough, polished enough, and has all of the other attributes that would make him a darned good Senator for the state of Connecticut,” adding “So we decided we’d draft him to replace Joe Lieberman.” There are some concerns for NOT doing this, but those get addressed as well. “Stranded Wind” explains his or her reasoning:

Here are some rationales I’ve heard for not doing this.

He lives in New York City. He has contract issues with his buyout. He doesn’t want to run for office. He is going to get on another network.

In order: He used to live in Connecticut and could easily return and establish residency. Let’s see if his contract issues are a barrier – that’s for he and his lawyers to determine. If he doesn’t want to run he is still a powerful voice and our efforts ought to be seen as a compliment. If he is going to another network fine, but he can do some things in the next two years, so let’s help him get excited about that.

There isn’t even an exploratory committee yet so there is no way to fund raise for this effort. There are two other Connecticut Democrats who think they’d like that seat. I think that those of us behind this effort can start pushing now, making this about raising awareness and driving voter registration. If Keith gets into the race that benefits him, and if he doesn’t we’re helping the chances of the other two lesser known candidates.

So far the “movement” has set up a Facebook page (that has roughly 430 fans at this point), a Twitter feed called @DraftOlbermann and plans to launch a website early this week.