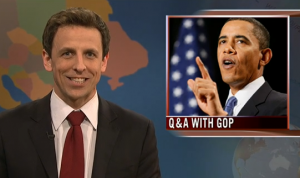 The Cornell Sun published an interview with Seth Meyers on Friday, in which the SNL writer discussed his background in comedy and joking about politicians. Mentioning how jokes about the crop of GOP candidates seem to write themselves, Meyers then said liberals may be more sensitive to the jokes because the view the show as safe territory.

Meyers was asked, “Have you had any weird comments or negative reactions from political figures because of sketches?” He responded:

There haven’t really been any weird things, but the nice thing for me is that Lorne [Michaels] instills in us to try and never write a joke that you would be embarrassed to see the person. So it’s funny when you do the Correspondents’ Dinner and I’ll run into Sarah Palin and say hello, because we met when she did the show and John McCain’s such a friend of the show. I feel like the weird thing is when you make a joke about a liberal, they’re probably more sensitive about it because they assume it’s a safer place for them.

Commenting on the Republican primaries, Meyers said the candidates have been so silly that the jokes almost feel mean:

This year we found it really interesting because we went into the year so excited about who the Republican candidates were, but they’re almost so silly that it feels mean when you write sketches about them. Whereas a lot of the time, we’re just sort of repeating what they said. Because, if you wrote a sketch about Rick Perry not being able to remember three out of three things it would be mean, but then when it happens you kind of have to.