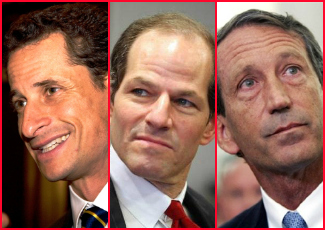 Actually, make that three married men who once held office.

OK, last time: Make that three married med who once held office and left in varying degrees of shame.

Mark Sanford, Eliot Spitzer and Anthony Weiner. Two were governors. One was a congressman. One simply cheated on his wife on a trip to the Appalachian Trail (which apparently extends all the way to Argentina). Another—a former district attorney—paid ($4300 per hour) for the (illegal) services of Ashley Dupre (who now, of course, writes a relationship column for the New York Post). And the third—a serial sexter–gave the aforementioned Post more chances to teach a clinic on Wordplay 101 than any other time in the history of the paper. The gems include:

But as President Clinton illustrated (and still does today), an elected official’s unfaithfulness being exposed isn’t—at least after taking a beating in the press and on late night TV—a career killer. In fact, it’s almost the opposite.

That said, Weiner is now leading the New York City mayoral race in two respected polls (Marist, Quinnipiac). If he were to lose, no matter…plenty of cable news networks—most likely MSNBC—would sign him for his fiery opinions and brand name (good, bad…really doesn’t matter) in about the time it takes to send a Tweet. Sexting, sex tapes…4 out of 5 Kardashians (net worth: $80 million) recommend it.

To keep the trend going, Spitzer announced Monday he is running for Master of Coin, otherwise known as City Comptroller (also New York). When it comes to making wise choices with large sums of money, who better for the job? This follows three stints as a national television host on three cable news networks, as well as serving as a columnist for Slate. His initial hiring after the scandal by both MSNBC and Slate was barely controversial at the time.

As for Sanford, he defeated Stephen Colbert’s sister for a congressional seat and nearly did so by double digits (54-45). He’s now engaged to the same woman he wisked away to below the equator.

Add it all up: In the 21st Century, redemption for any misbehavior or sin (save for anything remotely perceived as racism) for every public figure is now the expected result. Just ask Mike Tyson. Ask Michael Vick. Ask David Vitter and ask Chris Brown.

It’s just a hunch, but Spitzer announcing his intention to get back into public life was likely inspired by Weiner. Initially seen as a joke candidate, as a creepy guy who couldn’t dream of following in the mostly-successful footsteps of Rudy Giuliani and Michael Bloomberg (five terms), Weiner’s name recognition and somehow being seen as a sympathetic figure after taking his lumps may, may make him the next big cheese in Big Apple. Seeing all of this unfold, Spitzer’s confidence to get back in the political ring surges: He already knows he can deliver in public forums based on his stints in television, and figures, how can I lose?

Studies vary, but almost all say at least half of married men cheat on their wives, with the number going as high as 70 percent. And before you say Weiner—unlike Spitzer and Sanford—didn’t cheat because there was no physical contact, check out this survey commissioned by The Huffington Post: 85 percent of women considering sexting cheating, while 74 percent of men feel the same way.

So maybe forgiveness comes for all three because some voters see themselves in the way these men acted. Perhaps they’ve begged for compassion for their transgressions as well. And if the wives of Clinton, Spitzer and Weiner can forgive, some folks may begin to figure, “Why shouldn’t I do the same?”

The only difference between public and private citizens, of course, is not having a willing media to help tear them down…

Only to build them back up.