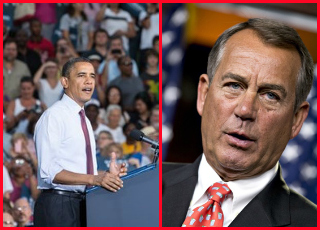 Benghazi, and the IRS, and the AP! Oh, my! Pour in a little NSA, stir the pot with some Obama’s coming for your guns, and I give you the first six months of President Obama’s second term—fueled by a Republican Congress and conservative media missing the memo that the President was re-elected by significant margins and the country is moving to the left of center.

Coming off an historic victory, becoming the first President since Franklin Delano Roosevelt to win re-election with a 7.9 % unemployment rate, this author was sure the Republican congress hell bent on defeating him during his first four years would have no choice but to lower the temperature, start making deals, and follow Bob Dole’s advice to close down for repairs in time to compete in 2016.

Aided by “scandals,” the Republican Party led on paper by Speaker John Boehner but in reality run by the tea party wings of the House and Senate, have decided to double down on Obama derangement. From blocking gun safety legislation favored by 90% of Americans to stalling on an immigration reform bill vital to their own survival to now preparing for another debt ceiling hostage standoff, it appears the GOP is more interested in winning the daily ideological tug of war than national elections.

And through all of this sits a President, with less than a year left in his term to get real legacy policy passed, busy playing defense against the GOP’s main weapon: obstruction.

This obstruction has two legs to it—the fresh, recent GOP scandal-palooza, and the longer-lasting real scandal of complete congressional obstruction aimed at the twice elected president. This now four and a half year old obsessive obstruction disorder, one that has become the new normal aided by a media attracted more to covering sensationalistic scandal over the unprecedented obstruction theatre kind of scandal, has driven President Obama to the point where he must take action to break the GOP stranglehold over progress.

So, does Obama go through door number one, sending out his advisers and press flacks this summer to defend the latest hot air scandal, or build his own door to go through, armed with what he does best—move his mouth, and rally the troops.

That’s right, it’s time for Obama to barnstorm America, and name names. Go back to Kentucky and tell Senator Mitch McConnell’s constituents, “I’m the President, and I’ve got a bridge to sell you, one that would create jobs but your Senator is blocking.”

Next, take the Presidential limousine eastbound to Ohio, and tell a dramatic story to John Boehner’s constituents of a land called filibuster, were the peoples leader blocked jobs, healthcare, and immigration reform.

Head up to New Hampshire, and ask Senator Kelly Ayotte’s constituents if the state slogan “Live Free or Die” has been changed to “bullets may fly, but we can’t bother legal gun owners.”

Hop on Air Force One, and take a flight to Texas, where you can ask Rep. Louie Gohmert and Sen. Ted Cruz’s constituents if they are on board with their representatives leading the charge to block delivery of Obamacare funds to the Lone Star State, which holds the dubious distinction of having the highest rate of uninsured citizens in the entire country. For good measure, play a video showcasing some of Gohmert’s best hits and watch in amusement as the crowd gasps aloud, “Are they making these up, or did he really say that?”

Head north into Badger land, and ask the constituents of one of your most recent opponents, Rep. Paul Ryan, why their representative has been shrieking about “runaway spending” and out of control deficits when the national deficit has fallen to the lowest levels since the President took office during an economic free fall. Also ask them if they’ve read Ryan’s latest budget, which takes an axe to Wisconsin and America’s most vulnerable, telling them they’re out of luck when looking for food stamps or government assistance.

If he wanted to, Obama could literally go to every state in the union, and point out specific things each Republican lawmaker has done to help block the agenda the majority of Americans voted for twice.

This would serve two purposes. First and more self-serving: provide sites like this one an absolute field day of fun sound bites to share with our audience and analyze. Second and more importantly, it would fire up the Obama troops from 2008 and 2012, a base he desperately needs to do something they haven’t done before—come out and vote the bums out in the midterm election.

The way to fire up the troops? Name names and identify the boogeymen and women that make up the GOP Congress.

The critics of this approach might decry this type of bold action as “beneath the office of the President,” and the conservative media will use an Obama offensive of this magnitude to accelerate their obstruction even more, charging the President with abusing taxpayer dollars on a lavish countrywide tour, with Rep. Darrell Issa opening up a new investigation into the accuracy of the President’s travel log.

But unprecedented and historic opposition toward the will of the people must be met with even more unprecedented and aggressive action. Obama can continue trying to broker middle of the road borderline conservative deals, painting himself as the pragmatic reasonable adult in the room, or look in the mirror and realize he is traveling on a dangerous road, one where he could go down in history as a presidential placeholder, a leader who bridged the gap between the catastrophe Bush and Cheney left us with and a potential historic leader like Hillary Clinton who finally cleaned it up.

Based on what we know about the man, Barack Obama thrives when the pressure’s on, and with the ball in his hand in the final minutes of the game. Only now, the way to thrive is reversing the pressure onto the other team, finally going on offense to take back his own presidency, and in his words break the fever.

A summer barnstorm would do just that, recreating the magic of 2008 while giving Americans a clear picture of exactly who is keeping unemployment high, wages stagnant, and hope fleeting.

Now that would be a summer blockbuster.