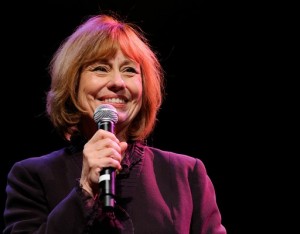 No wonder Sharron Angle has a history of running away from reporters who don’t work exclusively for conservative-leaning outlets. Nevada’s Republican Senate candidate—who said last month that she sticks with Fox News and its ideological ilk because they “ask the questions we want to answer,” then “report the news the way we want it to be reported”—recently told an acquaintance the real reason she favors right-wing media: They help her raise big bucks.

“When I get a friendly press outlet—not so much the guy that’s interviewing me—it’s their audience that I’m trying to reach,” Angle told a guest at a house party, according to Jon Ralston of the Las Vegas Sun. Angle—who may or may not have been aware that her words were being recorded—went on to explain just how profitable both Fox and Rush Limbaugh can be:

Guest: Sharron, how are you doing as far as the fundraising?

Sharron Angle: It’s going really well. If you’re interested in just the Internet part of that — and of course I’ve been criticized for saying that I like to be friends with the [press] — but here’s the deal: when I get a friendly press outlet — not so much the guy that’s interviewing me — it’s their audience that I’m trying to reach.

So, if I can get on Rush Limbaugh, and I can say, “Harry Reid needs $25 million. I need a million people to send twenty five dollars to SharronAngle.com.” The day I was able to say that [even], he made $236,000 dollars. That’s why it’s so important. Somebody…I’m going on Bill O’Reilly the 16th. They say, “Bill O’Reilly, you better watch out for that guy, he’s not necessarily a friendly”…Doesn’t matter, his audience is friendly, and if I can get an opportunity to say that at least once on his show — when I said it on Sean Hannity’s television show we made $40,000 before we even got out of the studio in New York. It was just [great]. So that’s what I’m really reaching out to is that audience that’s had it with Harry, and you can watch that happen when I go on those shows. Go on my website, it starts coming in. We have an automatic…when you put your name in there and it doesn’t tell how much you gave, but it tells your name and where you’re from. And so you can just watch it; it just rolls like this. In fact, with Rush Limbaugh we put it all down. We couldn’t take the ticker going fast enough. And we’ve pulled in over [3,000,000] dollars just from that kind of a message going out.

Angle has apparently raised over $3 million using this media strategy.

Bill O’Reilly most likely has mixed emotions about this quote; while no one wants to be presented as a patsy for a candidate’s fund-raising scheme, the self-described independent probably delights in having been described as “not necessarily friendly” in the audio clip below, which contains Angle’s entire explanation.

What Angle says in this clip isn’t exactly surprising—but her candor is. It’s tough to say how conservative voters may when they hear that when Angle looks at them, she sees dollar signs in their eyes.