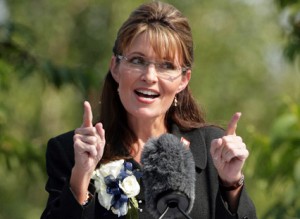 While Sarah Palin may be popular with various groups of Americans, there’s one group of Britons with whom she is becoming increasingly unpopular: people named Sarah Palin. Esquire reports that “the Sarah Palins of the world are not exactly enjoying this election cycle.” Snippets from the Facebook messages received by random Palins include: “You should never have been born,” “You bitch,” and “You’ve insulted every single black American.”

That sort of online hatemail is certainly unwelcome in anyone’s inbox, regardless of their name, but it seems that the confusion generally bears more quotidian fruits:

“In everyday life in England it’s fine, the odd comment — everyone thinks they’re the first,” says a Sarah Palin from outside of Manchester. “But on Facebook it’s just a right pain in the rear end.”

And it’s not just hatemail either. A West Derby resident named Palin mused that “90 percent of her fan base must be blind or illiterate.” And some of the Lady Palins across the pond wish they could monetize their monikers:

“If I had a pound for every time I have heard someone crack a joke about my name, I would be the proud owner of a Bugatti Veyron,” says one Palin from Brighton. “My name is actually not the same as hers either — I am a Sara, not a Sarah.”

Of course, while being named Sarah — or Sara — Palin can be a nuisance, it’s still the heritage of these women, and none of them have any interest in changing their name. In fact, some have had to fight with Facebook to just use it. A Manchurian Sarah Palin had to wrangle with administrators from the social media platform to prove that her name was, indeed, Sarah Palin. “They didn’t grasp that I’m English [and] live in England,” said this Palin. “She is of no consequence to anyone here.”