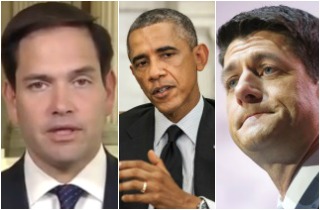 President Barack Obama announced Friday morning that he is rejecting the construction of the controversial Keystone XL oil pipeline, citing concerns from the State Department that the project would not be in the U.S. national interest. The news did not come as a surprise, as White House Press Secretary Josh Earnest confirmed in January that Obama would veto any legislation approving it.

Obama said the politics surrounding the pipeline “obscured the fact that [it] would neither be a silver bullet for the economy, as was promised by some, nor the express-lane to climate disaster proclaimed by others.”

Republicans unanimously denounced Obama for making what they described as a political decision, while most Democrats hailed the president for basing his decision on the threat of climate change. However, some in the president’s party — namely members of Congress who represent areas of the country where the pipeline would have been constructed — expressed their disappointment with the decision.

Here are the notable reactions.

In a statement, the newly-minted Speaker of the House called Obama’s decision “sickening,” adding that he is acting against the wishes of most Americans by taking into account the concerns of environmentalists.

“This decision isn’t surprising, but it is sickening. By rejecting this pipeline, the president is rejecting tens of thousands of good-paying jobs. He is rejecting our largest trading partner and energy supplier. He is rejecting the will of the American people and a bipartisan majority of the Congress. If the president wants to spend the rest of his time in office catering to special interests, that’s his choice to make. But it’s just wrong. In the House, we are going to pursue a bold agenda of growth and opportunity for all.”

Rubio, who launched his candidacy into the top tier among GOP presidential hopefuls after a strong debate performance last week, echoed Ryan’s sentiments.

“President Obama’s rejection of the Keystone XL Pipeline is a huge mistake, and is the latest reminder that this administration continues to prioritize the demands of radical environmentalists over America’s energy security. When I’m president, Keystone will be approved, and President Obama’s backward energy policies will come to an end.”

The Vermont senator, one of the most liberal in Congress, has long opposed the construction of the pipeline, and used both his presidential campaign Twitter account as well as his Senate one to commend Obama after the decision was announced.

As a leader in the opposition to Keystone XL from Day 1, I strongly applaud the president’s decision to kill this project once and for all.

It's insane to support the excavation and transportation of some of the dirtiest fuel. I strongly applaud the decision to kill #KeystoneXL.

Democratic frontrunner Hillary Clinton has yet to comment on the decision (UPDATED BELOW). After initially hesitating to reveal her position on the pipeline, Clinton announced her opposition in September. Clinton was secretary of state in 2011 when her department commissioned a report that concluded the pipeline would have a negligible impact on the environment.

In a statement, the Democratic presidential candidate touted his own energy and climate change proposals and cited his record as governor.

“We have a moral and economic imperative to tackle climate change. Paving the way for something like the Keystone Pipeline would be a step backward, and I’m glad to see that President Obama and Secretary Kerry today are rejecting the Keystone permits. We need to be serious about transitioning our energy off fossil fuels completely and investing in the growing clean energy sectors that are a tremendous jobs opportunity. I’m the only candidate who is setting a progressive goal of powering our nation by 100 percent renewable energy. I am also the only candidate who has gotten results — cutting greenhouse gases and creating thousands of clean energy jobs to tackle climate change. Clean energy isn’t a pipe dream, especially if we show the leadership to make bold and progressive choices about our energy future.”

The president’s decision is “the right call,” Merkley said.

The North Dakota senator said Obama’s decision was “purely driven by politics that ignored the facts,” and pledged to increase support in Congress to override the Obama administration. Supporters of the pipeline say it would have created jobs in her state.

“After about seven years of exhaustive studies and delays, the Administration finally made a decision on the Keystone XL pipeline – unfortunately, it made a decision purely driven by politics that ignored the facts. This commonsense project is just one small piece of a much larger energy strategy, but it has grown into a symbol for whether our country will support needed energy infrastructure. If we truly believe that realizing North American energy security and independence is a worthy objective for our nation, implementing a diverse energy strategy with our North American neighbors is necessary, and I’ll continue to work with our Canadian partners as I’ve done in the past. Yet, political ideologies on both sides of the aisle amplified the Keystone XL pipeline into something well beyond its actual reality. As I have said time and time again – it’s a pipeline. For years, I’ve been calling on the President to support this energy infrastructure project – or at least just finally make a decision – and building support among Senate Democrats for the project. Now Congress needs to find a path forward to reverse today’s decision. We need to work together to rise above partisan rhetoric, deal in real facts, achieve the all-of-the-above energy strategy this county needs, and see the Keystone pipeline for what it really is – just one more building block in making our nation more energy secure.”

A day after Christie’s low poll numbers resulted in his relegation to the undercard stage for the next GOP presidential debate, the New Jersey governor went off on Obama for what he called a “stupid energy policy.”

“Why did he lie to the American people for so long, that he was considering it?” Christie said at a campaign event in New Hampshire. “Did anybody with any common sense believe that Barack Obama was ever really seriously considering the Keystone pipeline?”

Christie added that “reason doesn’t persuade liberal ideologues” like Obama. The decision to reject the construction of the pipeline, Christie said, is a “slap in the face” to Canada, whose prime minister, Justin Trudeau, supports it.