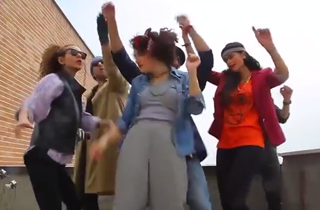 A few weeks ago, we brought you the story of the backlash against a group of British Muslims dancing along to Pharrell Williams’s hit song “Happy,” which attracted controversy over what many in the Islamic community considered a “vulgar” way to promote Islam. In Iran, however, dancing along to the innocuous song has more dire consequences: six young Iranians were arrested and forced to publicly apologize on state television after dancing in a music video to “Happy.”

According to the Telegraph, the six twentysomethings — three men and three women — were arrested for their “vulgar” video, which Tehran’s police chief personally decried as “hurt[ing] public chastity.” The video itself, part of a Pharrell campaign with the United Nations for the International Day of Happiness, racked up nearly a quarter of a million views before the state government took it down and charged the six with violating morality codes. The charges mainly centered on the fact that the women’s hair appears to be uncovered, a huge no-no according to strict Islamic dress codes for women, which state that “women must cover themselves from head to toe.” (One of the women who appeared in the video says they used wigs in order to conform to said codes.)

The most egregious part of their arrest, however, wasn’t just the fact that they were simply clapping along because they felt like rooms without roofs — it was their treatment at the hands of the Iranian police. One of the brothers of the dancers told the Telegraph that his sister was arrested “without any charge or civil right to defend themselves,” then made to “confess to their criminal acts” on public television.

“”The arrested people are being held at Vozara detention centre but as to which force is holding and interrogating them no one has any clue,” he added.

For his part, Pharrell is Not Happy:

It's beyond sad these kids were arrested for trying to spread happiness http://t.co/XV1VAAJeYI

Here is a copy of the video of young people indulging in vulgar unchastity, and stuff:

[The Telegraph]
[Image via screenshot]