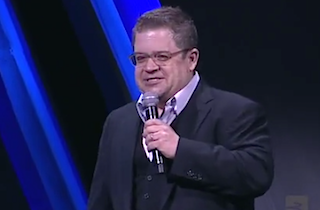 Comedian Patton Oswalt opened last night’s Webby Awards with a monologue that contained plenty of jokes, but also an impassioned defense of net neutrality in the face of new FCC regulations that could create a two-tiered system for internet speeds.

After spending a couple of minutes chastising the audience in attendance for looking at the internet on their phones instead listening to him talk about the internet, Oswalt began saying what he thinks the Webby Awards should do differently next year. “I’m kidding,” he said. “Next year, there’s not going to be an internet because of the network shills at the FCC.”

“There’s going to be a fight this year,” he said later. “And it’s going to suck. It’s going to be a shitty, long fight. But just like anything else. Just like film, just like rock ‘n’ roll, the weirdos and mutants will find ways to get through and subvert and keep it free.” The two “watchwords” for 2015, according to Oswalt, should be keep it “free” and “dangerous”

Oswalt also spent some of his opening time poking fun at the Bitcoin phenomenon, asking anyone who owns the virtual currency, “Are you broke or wealthy right now? What time is it?.”

He added, “Every time I turn on the news, the twin Herman Munster guys [Cameron and Tyler Winklevoss] from ‘Social Network’ are telling me to put all my money in King Joffrey dollars. I’m sorry, it’s hard to get excited about a currency that’s only useful for buying weed from the V for Vendetta people.”

Watch video below, via The Webby Awards: