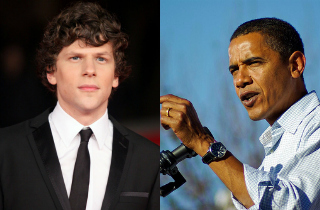 As we previously reported, in the 90 days leading up to Election Day, 90 different celebrities/authors will post their “reason” to vote for President Obama this year to an online project appropriately called “90 Days, 90 Reasons.”

Naturally, some of these posts have been, er… pretentious.

Take, for example, the recent post from Oscar-nominated star of The Social Network Jesse Eisenberg, who in an essay titled “President Obama Understands The World Writ Large,” makes the case for Obama thusly:

I’m traveling through Mongolia and currently staying in a yurt. This was not by choice; I’m with persuasive friends. If it were up to me I’d never leave my apartment and, more specifically, the bedroom area. But my comforts have given me a nagging sense of discomfort. I think traveling and seeing how other people live, even if I’m not totally immersing myself, assuages some of my unease because it re-sensitizes me to the difficulties and existential inconveniences that most other people face. In this way, I think Barack Obama is a good leader for our diverse country because he’s seen how the world lives. It doesn’t take a lot to realize that seeing the world forces you to interact with it in a different way and I know that I feel more comfortable being represented by someone who’s seen it.

This could be one of the most hilariously unwitting self-fulfillments of the stereotypical wealthy, white liberal wearing a keffiyeh, sipping fair trade coffee from some exotic developing country they’ve visited many times. His entire case for Obama is based on the fact that he is in a yurt… in Mongolia… with Wi-Fi access. And this somehow demonstrates the worldliness he admires and sees in the president.

– RELATED: 90 More Celebrities Want To Give You 90 Reasons To Vote For President Obama

Eisenberg’s point is understandable in the sense that liberals believe Obama’s foreign policy decisions reflect a greater understanding of and compassion for the world “writ large” (no word on how Eisenberg feels about the president’s use of unauthorized drone strikes), but “90 Days, 90 Reasons” creator Dave Eggers‘ introductory essay best encapsulates the willful foreign policy blindness that underlies both his and Eisenberg’s case for the president:

Republican leadership is not better for the economy than Democratic leadership. Bill Clinton brought the country eight years of peace and eight years of prosperity. George W. Bush brought two wars, crippling recession, and engendered a tangible, unshakeable feeling of national malaise. Two wars and a recession will do it every time.

President Obama inherited all this. And he’s done a very good job of trying to get us out of the hole Republican leadership put us in. The economy is in better shape now than it was in 2008—that is beyond debate. He ended the war in Iraq and he’s nearly finished our role in Afghanistan. And he accomplished what Bush’s two wars were meant to do: he removed the threat of Osama bin Laden.

A few corrections are in order here, and over at Reason Mike Riggs did the best possible job:

Actually, Clinton did embroil us in international conflict, in a little country called Bosnia. Clinton claimed that if the U.S. did not intervene, the Bosnian War would destabilize all of Europe, which would hurt the U.S. If that argument sounds familiar, it’s because Obama used it to impose a no-fly zone over Libya, which — thanks to our help — just elected its first interim president, one week after armed men attacked a Red Cross outpost for the fifth time in three months. Furthermore, Bush did not invade Iraq to kill bin Laden, but rather to find nonexistent weapons of mass destruction. This does not excuse the war, which was a terrible, terrible idea made possible by the Democratic Party and The New York Times, but facts do matter.

But the president is a war-ender, right? Not exactly. Take it away, Riggs:

Obama still has troops and U.S. military contractors in Iraq, and plans to have them in Afghanistan–in some form or another–indefinitely. He is flying predator drones over Yemen, Pakistan, and Afghanistan, and he is using them to kill teenagers with brown skin, under the auspices that any Muslim male old enough to grow pubic hair is old enough to die for the uncommitted future sins of men with similar religious convictions. He has murdered American citizens without giving them the increasingly quaint benefit of due process (negative rights are atavistic, don’t you know).

This, of course, is not to say that a Mitt Romney presidency’s foreign policy would be any better. (It wouldn’t.) But Eisenberg in his Mongolian yurt should at least recognize that “worldliness” does not necessarily mean a “sensitive” foreign policy.