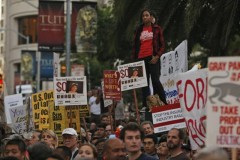 “I laugh, but also feel indignant, when I read that the tea parties are filled with angry white men, because it’s obvious that reporters are not attending the same tea parties I attended. The events were a mix of young and old, VERY mixed ethnicities (but yes, a majority white). Everyone to a person was courteous and polite, and the best part was the signs, which were funny and clever”

— The Daily Beast’s Tunku Varadarajan quotes “a Wellesley graduate, a widely traveled, thirty-something, multilingual daughter of Indian immigrants who lives in that most redneck of territories…Union Square, in Manhattan” in his defense of the Tea Partiers.

Get ready. Defending and/or warning against the prevalence the Tea Partiers is apparently the new media (dare we say elite?) parlor game. In today’s piece Varadarajan takes the NYT‘s David Brooks to task over his “cultural supremacist” attitude. And further points out that “when America was less of a meritocracy (and that was not so long ago), this solution was less damaging. Now that the country is run mostly by graduates of Ivy League schools, however, that they look down on the electorate is becoming not only vastly irritating to the electorate but also rather dangerous.”

It’s not made clear when exactly the period of time was that America wasn’t run by graduates of Ivy League school grads or the like (though maybe it coincides with the period of time Glenn Beck so fondly recalls during his “re-founding” moments), or how the non-meritocracy system, which was primarily based on class and wealth was somehow better than the one we have, but nevertheless! The point here is that the Tea Partiers, whether or not they like it, are being elevated by the media into a political force to be reckoned with in 2010 — think soccer moms, or Ross Perot without the bank account.