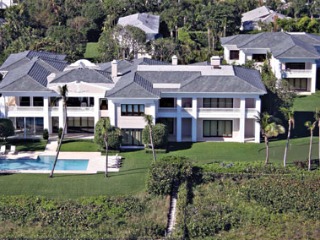 Living here in New York City, it’s not too difficult to determine where it is that various high-powered liberals hang out (everywhere), but where do conservative members of the media hang their hats? Do they ever feel the need to get away from the (literal and figurative) chill of NYC or DC? Well, evidently, if one wants to run into well-known conservative pundits and politicians while working on one’s tan, there’s no better place than South Florida.

The New York Times offers a revealing look at how various big names — Matt Drudge, Ann Coulter and Lou Dobbs among them — have headed, in droves it seems, down to Miami and Palm Beach. And it would appear that this exodus kicked off in 1996, when none other than conservative radio host and author Rush Limbaugh moved into an estate on Palm Beach’s tony North Ocean Boulevard (The Week offers a closer look into Limbaugh’s massive estate, from where he currently hosts his radio show). And, if this little anecdote is any indication, he’s having a lot of fun:

Gay Gaines, a longtime confidante and fund-raiser for Newt Gingrich, remembers the occasion well. Mr. Limbaugh now lives in an estate two doors down from her on North Ocean Boulevard. He fell in love with Palm Beach, she said, after visiting her over Memorial Day weekend in 1995.

“I might have a picture,” she said, disappearing into a sitting room just off her palatial living room, which faces the Atlantic and has floor-to-ceiling picture windows. Sure enough, she emerged a few seconds later with a photo of Mr. Limbaugh, Mr. Gingrich and William J. Bennett, the former adviser to Presidents Reagan and George H. W. Bush. The photo shows Mr. Limbaugh playing air guitar, Mr. Bennett playing an actual guitar and Mr. Gingrich holding a beer.

And then there’s conservative media organization Newsmax, which opened up its West Palm Beach headquarters in 1998. We’ll leave you to read the article itself to figure out why more and more conservatives find themselves drawn to the area (Hint: The warm weather doesn’t hurt), despite its large liberal population, but we couldn’t resist adding this:

The area’s popularity with conservatives has not been lost on visiting liberals. As Ms. Coulter was standing at the entrance to the Ritz, she bumped into Bill Maher, the liberal talk show host who was in town to do a comedy act. (She was a frequent guest on Mr. Maher’s show “Politically Incorrect.”) “Ann?” he said, sounding surprised and bemused. “Is Rush going to show up next?”