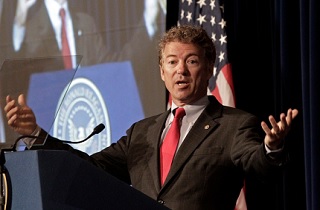 Even as Sen. Rand Paul (R-KY) takes criticism from overly-sensitive fans of The Great Emancipator, his fortunes with Republican primary voters continue to improve. In Democratic-leaning (but dead-on accurate) Public Policy Polling’s April poll, the Kentucky senator leapfrogged to second place among Republican presidential hopefuls, nationally. In PPP’s most recent poll of first-in-the-nation Iowa, the Southern Avenger’s biggest defender has taken the lead with registered Republicans in the state, but still gets clobbered in head-to-head polling with former Secretary of State Hillary Clinton.

This latest PPP poll was taken between July 5 and July 7, before the Southern Avenger story hit. If you missed that, Paul’s new media director, Jack Hunter, was raked over the coals by a Washington Free Beacon exposé detailing the exploits of Hunter’s Confederate mask-wearing, Lincoln-hating, John Wilkes Booth-toasting Southern Avenger, and of views which he publicly defended until very recently. Sen. Paul decided to stand by Hunter, a decision which could affect his position in Republican primary polls. My money is on it helping him.