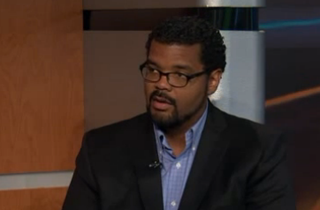 Antonio French, an alderman of St. Louis, MO, was arrested late last night during the riots in Ferguson over the death of Michael Brown.

His wife confirmed on Twitter that French, an elected official who represents St. Louis’s Ward 21, was being detained by the Ferguson police department, mere hours after they’d arrested two journalists (though they quickly released the journalists upon realizing who they were affiliated with).

There is footage of a crowd gathered outside the Ferguson Police Department demanding his release:

According to his bio on the City of St. Louis’s web site, French, a Democrat and former political consultant, was once named the area’s “best local politician” by the Riverfront Times:

Last year, his “Block by Block” partnership with the non-profit Rebuilding Together and Boeing resulted in the rehab of more than 50 homes for seniors and disadvantaged homeowners.

His partnership with the Sheldon Concert Hall has led to two successful summer jazz concert series in O’Fallon Park, helping to revitalize that beautiful public park.

In cooperation with the St. Louis Police Department, he created “safe zones” for hundreds of children in north St. Louis to trick or treat on Halloween night.

French has also been filming the protests-turned-riots in Ferguson since the news of Brown’s death broke, posting his footage on Twitter, and also appeared on local channel Fox2Now to discuss the role social media is playing in covering the riots. Watch his appearance from yesterday morning below:

After a night in the #Ferguson jail, I'm free. My staffers who were also arrested last night are also free. Thank you for all the support.