Stop Blaming Sofia Vergara for Your Objectification of Her 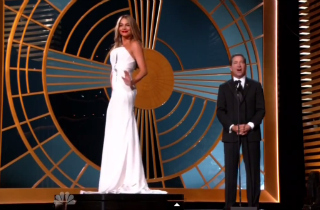 The internet got upset during last night’s Emmy Awards, when Sofia Vergara climbed atop a literal pedestal for a joke about diversity in television. Among some of the bizarre reactions was Huffington Post: “A very troubling turn.” Jezebel: “She was treated like a literal object.” Salon: “A bizarre, objectifying Emmy moment.” The Today Show quoted one person saying, “Sofia Vergara is the highest paid actress on TV and they just made a joke of her.”

But what really objectifies Vergara more: Her choosing to climb atop a rotating platform to mock television’s tokenism and shallowness? Or someone describing what happened as the Emmys making a joke of her?

If rotation, elevation, and a tight-fitting dress means viewers and commentators can no longer see Vergara as a subject, capable of making choices and satirizing her chosen field, that hardly seems like her fault. In fact, generally speaking, it’s not a good cultural norm to move responsibility for what goes on in one person’s head to another person.

The difference between an object and a subject is agency. A subject acts, chooses; an object is acted upon. A subject owns and is responsible for, if nothing else, herself. An object is owned and bears no responsibility. There’s a neat little agency trick in blaming Vergara for her own objectification. It removes the agency from where it belongs to where it doesn’t. The only thoughts Vergara should be held responsible for are her own.

Perhaps the most ironic thing about the way many feminists gripe about objectification is that it has the exact same problems as modesty exhortations. Both transfer responsibility for what goes on in men’s heads to women. Feminists have rightly pointed out that the problem of modesty culture is that it makes women responsible for men’s sexual thoughts about them. Women are then in the no-win situation of being required by the culture to look attractive to men, to dress femininely, but to not look too attractive, or wear anything too revealing, lest the put thoughts in men’s heads that shouldn’t be there. Of course what’s too revealing is never described well enough for women to know where to draw the line.

The exact same thing is true when we blame women for other people’s objectification of them. It, again, transfers blame from the person doing the objectifying onto the woman being objectified. It’s, again, a no-win situation for women. And how exactly are women supposed to know when they’re objectifying themselves? Sexy dress is okay. Joking is okay. But get a spinning pedestal involved, and suddenly, self-objectification!

The same thing happened to Miley Cyrus at the 2013 MTV Video Music Awards. The conservative Independent Women’s Forum decided to slut-shame Miley Cyrus, blaming her for any objectification which might have happened because she twerked in a nude bikini. “She shouldn’t over-sexualize herself because it undermines her talent, her accomplishments, and her natural beauty –- and it reverses the conversation about women back to their bodies,” the op-ed proclaimed.

Here’s the fundamental issue: As soon as you’ve decided that you can dismiss what a woman is saying based on poorly-defined-but-rigidly-enforced rules about what she should be putting in or on her body, or putting her body on, you’re the one objectifying.

Vergara stepped up on that pedestal because she had something to say about her industry. If you can’t hear it over the sound of her beautiful body, that is your malfunction.

So what’s to be done about this malfunction? It’s simply true that some people have a difficult time seeing someone as a sexual being and a full person at the same time. One solution is to hide away women’s sexuality. We can tell Vergara to wear a looser dress, or step off the pedestal. Burqas are further along the exact same train of thought.

Another solution is to encourage women to wear what they want, joke about what they want, climb on top of what they want, and educate men and women that regardless of what a woman is wearing or where she’s standing, she’s a real person with real thoughts and feelings. More importantly, the solution to objectification requires we first recognize that no matter what, each person is solely responsible for what happens in their own heads.

For those who reduced Vergara to an object because she climbed onto a pedestal for a joke, that is entirely their failing, not hers.

— —
Cathy Reisenwitz is an Editor at Young Voices and a D.C.-based writer and political commentator. She is Editor-in-Chief of Sex and the State and a columnist at Townhall.com and writer for Bitcoin Magazine. Follow her on Twitter here.