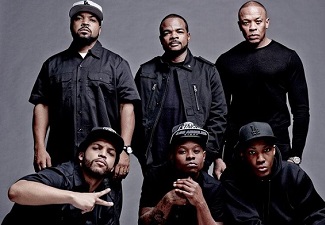 After a long and winding road to the big screen, the N.W.A biopic Straight Outta Compton hit it big this weekend, racking up an estimated $56 million in ticket sales and creating an online buzz that even the White House couldn’t resist (although they should have). The film traces the rise and dissolution of the highly influential rap crew N.W.A, and while its success seems to be a surprise to the media, it shouldn’t be.

The film is directed by F. Gary Gray, a prominent black director with an eye for commercial success, and aside from the built-in audience for a film about the pioneering rap superstars, its release comes at an auspicious cultural moment. Just as N.W.A made an unlikely crossover with white audiences 25 years ago, the police brutality they rapped about has finally crossed over to white audiences, thanks to the video proof that is now available for all to see. It’s ironic that so many of the people now shocked by the videos that have fueled the #BlackLivesMatter movement have been rapping along to those same stories since they were kids.

Their place in music history is undeniable, as is their virtuosity. To be frank, rap music in the mid-to-late 80s wasn’t about shit, because everybody was trying to catch crossover lightning in a bottle, and there were only a few available strategies to do that. Socially conscious rap wasn’t one of them, unless you could get Aerosmith to back you up, or somehow fit your message into a “Roxanne, Roxanne” answer record. Then along came overtly political and hard-as-nails Public Enemy, who put black political consciousness back on the charts, and N.W.A (Niggaz Wit Attitudes), whose innovation was to make living black life a political protest in and of itself. In a way, they were the Edward Snowden of black life, except people completely ignored their whistleblowing while, as MC Ren put it, “their whole f**kin’ family is wearing our t-shirt.”

But as with many music superstars, their legacy is a complicated one, and Straight Outta Compton has drawn criticism for key omissions, including Dr. Dre‘s assault on Dee Barnes, better known as Sista Dee. Here’s how Barnes described the 1991 incident (via Rolling Stone):

According to a statement issued by Barnes, Dre picked her up and “began slamming her face and the right side of her body repeatedly against a wall near the stairway” as his bodyguard held off the crowd. After Dre tried to throw her down the stairs and failed, he began kicking her in the ribs and hands. She escaped and ran into the women’s restroom. Dre followed her and “grabbed her from behind by the hair and proceeded to punch her in the back of the head.” Finally, Dre and his bodyguard ran from the building.

Several members of the group bragged about the incident to Rolling Stone, and even Dre himself said “”People talk all this shit, but you know, somebody fucks with me, I’m gonna fuck with them. I just did it, you know. Ain’t nothing you can do now by talking about it. Besides, it ain’t no big thing – I just threw her through a door.”

Barnes’ crime was hosting a TV show that featured some coverage of Ice Cube’s departure from NWA that Dr. Dre didn’t like, and which Barnes insists she had no hand in, but that’s really beside the point. To fully understand the significance of this incident, you have to know who Sista Dee was then (she’s still active today, and not in a forgiving mood).

Dee was the host of Pump It Up!, which was an oasis in a late-’80s hip-hop television desert. When you heard the opening bars of the show’s theme song, you knew you were going to see the videos that Yo! MTV Raps was scared to play, or from socially-conscious artists they didn’t care to play. More than that, though, Sista Dee’s show was the only place on TV where Monie wasn’t in the middle of a sea of male rappers, but alongside scores of female rappers who couldn’t get play, and whose names weren’t Queen Latifah, Salt, or Pepa. As the ’90s dawned, so did a plethora of artists for whom hip-hop was about something, and NWA fit that bill, initially.

Part of their legacy, though, is that their popularity took hip-hop in another direction at that crossroads. The gangsta genre devolved from a gritty Homeric document of black life into pulp entertainment for the white masses. Along with it came heavy doses of violence and hostility toward women (which, to be fair, has long been a selling point for rock music, too) that even nice guy family film star Ice Cube still shrugs off to this day:

“If you’re a bitch, you’re probably not going to like us,” he says. “If you’re a ho, you probably don’t like us. If you’re not a ho or a bitch, don’t be jumping to the defense of these despicable females. Just like I shouldn’t be jumping to the defense of no punks or no cowards or no slimy son of a bitches that’s men. I never understood why an upstanding lady would even think we’re talking about her.”

Did he just use the Michael Scott Chris Rock excuse? These are slurs against women, not general purpose insults. In the same article, 24 years on, Dre offers some half-assed expressions of regret, but the film’s exclusion of the incident illustrates a sad truth.

Director F. Gary Gray offered a somewhat dismissive explanation of the omission recently, saying it didn’t fit the narrative and comparing it to a diss record, but essentially, he’s right. The assault on Sista Dee was barely a blip when it happened, and had no effect whatsoever on the group’s popularity or reputation. I still wish he had put it in the movie, but the next scene would have been nobody giving a shit.

So now, N.W.A is enjoying a moment of vindication, as all of America is finally opening its eyes to the abuses they rapped along to all those years, and you really can’t take that away from them. You can feel free to separate the art from the artist, as we have done constantly, for centuries. Fuck Tha Police will always be the call that #BlackLivesMatter is now a response to, and Express Yourself will always be as dazzling a display of writing and rhyming skills as you can find.