Study: Your Reactions to ‘Disgusting’ Images Indicate Whether You’re Liberal or Conservative

Study: Your Reactions to ‘Disgusting’ Images Indicate Whether You’re Liberal or Conservative 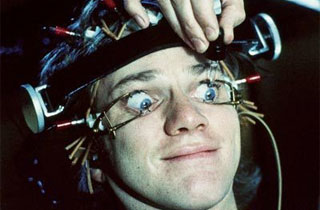 Much like tallness, redheadness, and diabetes, political leanings may be influenced by one’s genetics: according to a study recently published in Cellular Biology, scientists could accurately determine their subjects’ political preferences based on their neurological response to disturbing and “disgusting” images.

P. Read Montague, a leading neuroscience professor at Virginia Tech, posited that barring environmental factors (i.e. education, upbringing, etc.) people may be hardwired towards certain political affiliations, though their beliefs are by no means “pre-determined.” To that end, he and his colleagues asked subjects to look at a series of positive, negative, and revolting images — i.e., mutilated animals — while observing their neural activity using an MRI scanner.

The study found, surprisingly, that the response to even one photo could accurately predict the subject’s political orientation:

Disgusting images, and the mutilated body of an animal especially, generated neural responses that were highly predictive of political orientation. That was true even though the neural predictors didn’t necessarily agree with participants’ conscious rating of those disturbing pictures.

Montague took pains to emphasize that the test couldn’t determine the emotional nature of a conservative versus a liberal response to a “disgusting image,” i.e. whether the subjects felt disgust, pity, indifference, etc., and how those specific emotional reactions corresponded to their political orientation. In short, the study can’t be used to declare a conservative heartless or a liberal squishy — “but they do suggest that important foundational parts of political attitudes ride on top of preestablished neural responses that may have served to defend our forebears against environmental threats,” he wrote.

[Newsweek]
[Image via A Clockwork Orange]