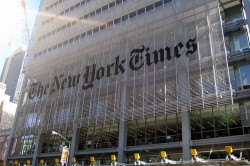 The Wall Street Journal launched their much-anticipated ‘Greater New York’ section this morning in a concerted effort to challenge the New York Times‘ local coverage, circulation, and advertising dominance. Below find Arthur Sulzberger and Janet Robinson’s memo to staff regarding the launch…they don’t seem too worried. Actually, it reads a bit like a blog post: “the Dodgers now play in Los Angeles, Soho is the acronym for South of Houston.” Full memo below.

Some folks just have a different learning curve.

After 120 years of existence, The Wall Street Journal this morning has finally decided to cover New York north of Wall Street. In the spirit of journalistic camaraderie, we welcome the Journal’s new local section. The New York Times has been the paper of record in New York for nearly 160 years, and we know just how difficult it can be for start-ups to develop a following.

While there will be much sound and fury to this new endeavor, we thought we would take this opportunity to remind everyone about our position of strength in the New York marketplace. We will include a series of numbers that, to borrow a phrase often misused, are “fair and balanced.”

Let us start with our audience in The New York Times. As our straightforward and accurate ad campaign points out (and if you get a chance, take a look at our dynamite new commercial: http://nytimes.whsites.net/nyt_centercut/index.html):

o On weekdays, The Times newspaper reaches over 900,000 affluent adults in the New York market (2009, Scarborough NYR2, Weekday). The median household income for a reader of the Sunday New York Times is over $118,000 (Fall 2009, MRI). In fact, The New York Times in print delivers an outstanding household net worth of almost $800 billion in the New York DMA alone (2009 Mendelsohn Affluent Head of Household Survey, HHI, $100,000+).

Of course, The New York Times remains the definitive advertising vehicle in the New York marketplace for reaching a diverse audience:

o The New York Times has a 49% print share among the three national newspapers (Kantar Media, full year through December 2009; excludes in-house ads). The others happen to be The Wall Street Journal and USA Today.

o We dominate the luxury advertising market with lush, brand-appropriate retail and editorial environments like T: The New York Times Style Magazine and the Style, Travel, Dining and Home sections.

Advertisers know that Times readers are significant consumers of, well, everything:

o And book advertisers constantly tell us that nothing raises awareness like a New York Times review. Our readers purchased almost 56 million books in 2008 (MRI Spring 2009).

We could go on and on with favorable reader and advertising comparisons. We could also talk forever about our award-winning, agenda-changing journalism and how we set the standard in New York in so many different areas, from art, health and real estate to fashion, entertainment and politics.

The Wall Street Journal already knows our readers and advertisers are very loyal to The New York Times and it will soon discover the intensity of that dedication, as The Times is a great newspaper, a great Web site and a great advertising vehicle.

So as our welcome gift to New York, we pass on a few helpful hints to our Journal colleagues: the Dodgers now play in Los Angeles, Soho is the acronym for South of Houston, Fashion Week has moved to Lincoln Center, Idlewild is now JFK and Cats is no longer playing on Broadway.

If you happen to know anyone who works for the Journal’s new section and he or she wants any additional information about the greater New York region, tell them to check out NYTimes.com’s always very helpful archive.