Survey: Americans Are Pretty Ignorant When It Comes To Religion

Survey: Americans Are Pretty Ignorant When It Comes To Religion 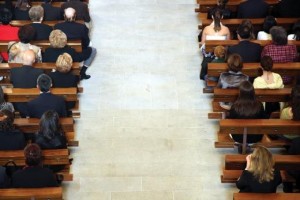 Americans know very little about religion, though perhaps you’d already surmised this based on this summer’s much talked about poll that revealed much of the country was unsure whether President Obama was a Muslim. A new survey Pew Forum on Religion & Public Life reveals actually Americans don’t know much about most religions, including the ones they may practice. From the LA Times:

A majority of Protestants, for instance, couldn’t identify Martin Luther as the driving force behind the Protestant Reformation…Four in 10 Catholics misunderstood the meaning of their church’s central ritual, incorrectly saying that the bread and wine used in Holy Communion are intended to merely symbolize the body and blood of Christ, not actually become them.

And from the NYT:

Interestingly atheists and agnostics knew more than those who practiced, though Pew chalked that up to the fact that many people who leave the church do so after “a great deal of reflection and study” and of the people who practiced Jews and Mormons outperformed “all the other religious groups in our survey,” What people were mostly certain on is that public school teachers are not allowed to lead their class in prayer, they are, however, allowed to teach about religion, something most participants seems confused about.