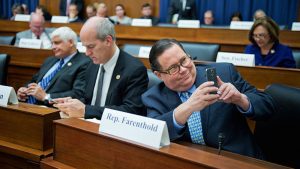 According to Representative Blake Farenthold (R-TX), three “female senators from the Northeast,” are entirely to blame for the Senate’s inability to repeal Obamacare.

Of course, Maine Sen. Susan Collins, who dissented from the bill for slashing funding to Planned Parenthood, and Senators Lisa Murkowski (R-AK), Shelley Moore Capito (R-WV) are, indeed, hard no’s on the GOP health bill, but it’s typical GOP misogyny to blame and attack women, rather than acknowledge that the bill is floundering because it’s a seriously flawed, seriously unpopular bill that could literally kill thousands of Americans.

In either case, in remarks on radio Corpus Christi radio host Bob Jones‘ show on Friday, Farenthold seemed determined to take things back in time, threatening to handle his anger with Collins, Murkowski, and Capito “Aaron Burr-style” with a good, old fashioned duel, and Collins has since responded with some equally disappointing comments of her own.

“Did you see the one that challenged me to a duel?” she said to Senator Jack Reed on Tuesday.

Reed responded, “Trust me, do you know why he challenged you to a duel? Because you could beat the sh-t out of him.”

The audio gets a bit difficult to understand here, but Collins is heard saying “fat guy,” “he’s huge,” and “he is so unattractive it’s unbelievable.”

The disparaging comments are particularly disheartening coming from a female lawmaker who should know all too well what it’s like to receive insults on her looks. No matter who the subject is, personal insults about weight and appearances should be left out of political discourse.

But that being said, it would be a mistake to focus on off-handed negative comments by Collins, and ignore that a GOP representative literally wants to duel three women over health care.

“Some of the people that are opposed to this, there are female senators from the Northeast,” he said and added without an ounce of irony, “If it was a guy from South Texas, I might ask him to step outside and settle this Aaron Burr-style.”

There’s undeniably a dimension of humor in his words — here’s a man so angry that the government won’t be able to take health care away from millions of low-income families, sick children, and the elderly that he is literally prepared to fight three women to the death. Then there’s the other dimension of this, which is a concerning threat of violence against women.

Of course, I’m not saying anyone is in immediate danger — Farenthold probably just got a bit carried away, and you know how “boys will be boys” — nor am I saying that this is anything new for female lawmakers, who have been forced to accept rape and death threats as part of the job.

In either case, Sen. Collins chose to laugh it off, and there’s something to learn from both of their gaffes. If we want politics to go back to being professional and respectful, let’s start with not challenging people to duels and not calling people “huge” or “so unattractive it’s unbelievable.