Susan Sarandon: If ‘Dangerous’ Hillary Would’ve Won, ‘We Would Be at War’

Susan Sarandon: If ‘Dangerous’ Hillary Would’ve Won, ‘We Would Be at War’ 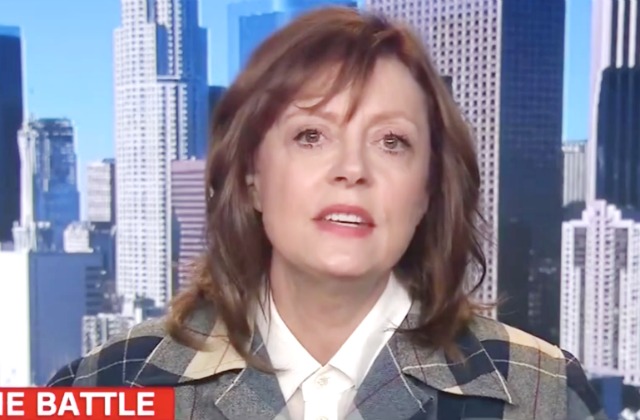 During the 2016 presidential election, Oscar-winning actress Susan Sarandon was a fervent Bernie Sanders supporter. And she really, really, REALLY disliked Hillary Clinton. Before Sanders lost the Democratic nomination to Clinton, Sarandon told MSNBC’s Chris Hayes that she didn’t think she could vote for Hillary in a two-person race with Donald Trump. She also told Hayes that “some people feel that Donald Trump will bring the revolution immediately, if he gets in.”

Following the election — Sarandon eventually supported and voted for Green candidate Jill Stein — the actress has taken quite a bit of heat from the center-left over her refusal to support Clinton and her insistence that a Trump presidency wouldn’t have been much worse than Hillary’s. In another interview with Hayes in February, she said Trump’s election made people more “awake” and involved. Meanwhile, in an April appearance on The Late Show, she echoed those sentiments, stating that people are more “energized” with him in office.

Well, a recent interview with The Guardian is sure to further raise the ire of moderates, Democrats and Clinton supporters. Why? Oh, just because Sarandon said that Clinton is extremely “dangerous” and would have led the country into war.

“Not exactly, but I don’t mind that quote,” she responded when asked if she said Clinton was more dangerous than Trump. “I did think she was very, very dangerous. We would still be fracking, we would be at war [if she was president]. It wouldn’t be much smoother. Look what happened under Obama that we didn’t notice.”

(It should be noted that the United States has been at war in Afghanistan for the past 16 years.)

When the interviewer noted that it seemed “absurd” to claim that issues such as taxation, healthcare, childcare and immigration wouldn’t be far different under a Clinton presidency, Sarandon answered that Hillary would have just done things “sneakily” like Obama did.

“He deported more people than have been deported now,’ Sarandon said. “How he got the Nobel peace prize I don’t know. I think it was very important to have a black family in the White House and I think some of the stuff he did was good. He tried really hard about healthcare. But he didn’t go all the way because of big pharma.”

Sarandon also talked about the amount of attacks she got from the left when she said that she stood with Dreamers in the wake of Trump threatening to revoke DACA.

You can read the rest of the interview here.