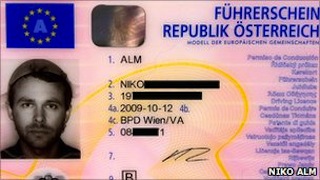 And here’s a weird one. In Austria, a man named Niko Alm has gotten a license he first applied for three years ago. Why did it take so long? Well, Alm asked to be photographed wearing a pasta strainer on his head. The reason? His religion requires it.

Well, his anti-religion religion. Alm is a Pastafarian, which is a member of the Church of the Flying Spaghetti Monster. Sound ridiculous? It’s meant to be. Besides, as a Pastafarian would point out, your magic space man isn’t so realistic either.

The Church has its origins in a letter written in 2005 by Bobby Henderson, a 24-year-old who wrote an open letter to the Kansas State Board of Education regarding their plans to begin teaching Intelligent Design in addition to the “theory” of evolution. In his satirical letter, he concurred and argued that his belief, that a “flying spaghetti monster” created the universe, should be taught as well, arguing that “we can all look forward to the time when these three theories are given equal time in our science classrooms across the country, and eventually the world.”

The letter became an Internet phenomenon and soon, an entire ironic “religion” had been created based around Henderson’s jokey “belief.”

Which brings us back to Alm. Alm, an Atheist, saw that Austrian law allowed headgear in license photos only if it was for religious purposes. He set about making his own satirical point by asking to wear a pasta strainer to represent his Pastafarianism. The authorities responded by requiring he seek a medical evaluation to prove he was “mentally fit” to drive. However, he passed and now, three years later, his license is as you see it above.

The best part? Not only has Alm won a small victory for religious freedom everywhere (including the freedom to go without), he’ll forever win any bar conversation about who has the strangest photo on their license.