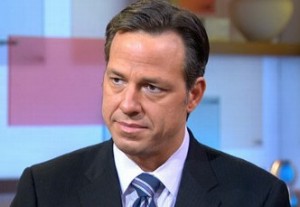 Yesterday, Donald Trump repeatedly refused to denounce the KKK during an interview on Jake Tapper‘s State of the Union. Then, he tweeted a video of himself saying, “I disavow, okay?” in the same petulant tone one usually associates with teenagers who are simply trying to get their parents to stop harping at them about taking all the dirty cups out of their room and back to the kitchen.

None of this would have happened if Chris Christie had shown up for the interview he promised to Tapper. After he bailed, the man he recently endorsed offered to take his place, later complaining that the interview was furnished incorrectly and made him look bad. The result was something like this:

Maybe Christie didn’t show up because he was afraid Tapper would roast him on all the times he he insulted Trump. As it stands, no one knows why the governor of New Jersey didn’t show up for his screen time, but it’s true that the KKK has been getting a lot of coverage.

Even Tapper has no idea what happened. In an exchange on Twitter, he responded to a fan who asked why Christie wasn’t listed in a tweet about upcoming guests, calling the former presidential candidate’s decision to back out “very disappointing.” He then told the fan that it had been Christie’s idea not to show up, not the Trump campaign’s.

Then came this exchange:

@Harleybrensson @GovChristie I can’t read anything into it, I was just stunned. Very unlike him.

The sentiments about Christie being embarrassed by his recent endorsement were echoed in the other replies, too.

@jaketapper @GovChristie very poor form and leaves open to speculation about whether he proudly stands by his decision.

Weirdly, Christie didn’t flake on George Stephanopoulos, who grilled him about his prior icy relationship with Trump until he was good and crispy.