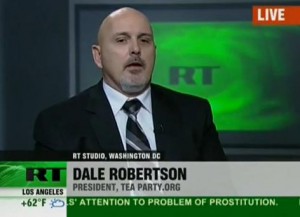 Call it the Tea Party version of the “Whitey Tape,” if the “Whitey Tape” really existed. Dale Robertson, self-proclaimed founder of the Tea Party movement, was quoted in today’s Washington Times denying he had ever “seen any racial slurs” at Tea Party events. He was responding to the furor over nasty, sometimes violent reactions to the passage of health care reform.

There’s just one problem with Robertson’s claim: He was famously photographed at a Feb. 27, 2009 Tea Party event holding a sign that featured the n-word. (via FreakOutNation)

For a movement trying to shake accusations of racism, the Tea Partiers could not have found a worse spokesman. Not only did Robertson’s sign have the n-word written on it, he had also misspelled it. The image plays into the worst 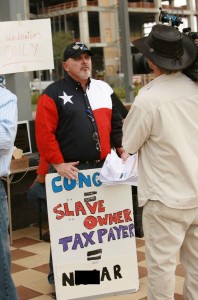 Here’s Robertson’s full quote, in which he tries to deflect the blame onto the Democrats:

“These people could be anybody. I wouldn’t put it past the Democrats to plant somebody there,” Mr. Robertson said. “They’re trying to label the tea party, but I’ve never seen any racial slurs.”

I happen to be friends with a lot of conservatives, including many involved in the Tea Party movement, and while I disagree with them, I don’t think for a second that Robertson speaks for them, or for most Tea Partiers. The problem is that, after over a year of protests, the movement has still not succeeded in expelling this element.

On a larger scale, conservatives seem invested in the notion that accusations of racism are worse than actual racism, and refuse to acknowledge all but the most explicit examples of it. In this case, there’s no mistaking it, but when James O’Keefe, for example, shows surprise at being a convincing pimp by saying “I’m one of the whitest guys ever,” he remains a conservative hero.

Video of Robertson claiming to be the founder of the Tea Party movement below: