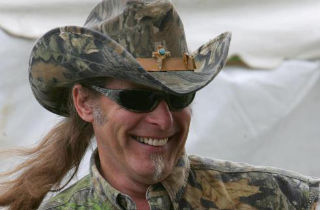 Buried within a Washington Post magazine profile of Ted Nugent comes a nugget in which the musician and gun enthusiast jokes about gunning down people in South Central Los Angeles like he does with feral hogs in Texas.

Earlier this year, we reported on Nugent’s boasting that he has shot and killed 455 feral pigs as part of a Texan program to decrease the crop-destroying population of hogs in the hill country. We distributed tons of the most delicious pork to the soup kitchens and homeless shelters of this state,” Nugent said at the time. “Everything we did was perfect – win win win.”

It’s a story Nugent loves to tell, according to the Post profile. The writer then quotes Nugent from a recent San Antonio speaking appearance, in which the gun rights activist added what many might consider an off-color joke [emphasis added]:

“Lots of places have a hog problem,” Nugent said. “In Texas, the hogs have a Ted problem.” He described the giddy joy of shooting from the open copter with an M4 machine gun. “And four hours later I had 450 dead hogs,” he said to loud applause. Then he added an afterthought that produced ample laughs: “And now if they would just take me to South Central. … Okay! I kid.”

“South Central” is a predominantly Latino and black area of Los Angeles that has become infamously associated with gang activity, urban decay, and the origin of the 1992 Rodney King riots. Although the street crime rate has steadily declined since the late ’90s, the area is still associated with crime, prompting the city to change its nickname to “South Los Angeles” in the hopes of revamping its reputation.