Texas Lawmaker: ‘It Makes No Sense’ Not to Allow Guns in Hospitals 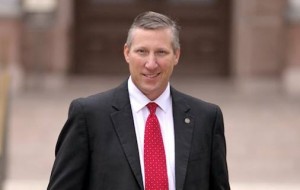 When it comes to guns, Texas is not the NRA-funded free-for-all that everyone living outside its borders assumes it to be. However, new legislation passed in April allowing open carry is set to go into effect in January. The new law will let handgun owners with concealed carry licenses to publicly boast their weapons via should holsters and hip straps.

That’s still not enough, according to State Representative Drew Springer (R-District 68), who wants to do away with so-called “gun-free zones” — especially hospitals.

Talking to KERA News, Springer recounts a story about being frightened out of his wits in the urban parking lot of Harris Methodist Hospital in Fort Worth. “I spend the next 10 minutes walking in a dark parking lot to get to my car in downtown Fort Worth and I absolutely did not feel safe.”

The representative argues that the state’s current arrangement “makes no sense” because he can’t walk into a hospital with his handgun. Sure, he and his fellow politicians can bring theirs onto the Capitol grounds in Austin, but what about the state’s hospitals?

“I’ve had both employees as well as visitors of their loved ones that have said we’re right here on the interstate, there’s a big sign that says hospital and people are coming off and trying to rob them of their drugs,” Springer tells KERA News. “They feel vulnerable and they want the right to be able to protect themselves.”

In response, Captain Dan Birbeck, who serves the Dallas County Hospital District Police, doesn’t agree with Springer. He counters the representative’s insistence on feeling safe, noting that while people “may have the right to defend themselves, they don’t have the right to put others in danger.”