‘That’s Not Fair!’: Kellyanne Conway Responds To MSNBC Anchor Asking How She Faces Her Kids 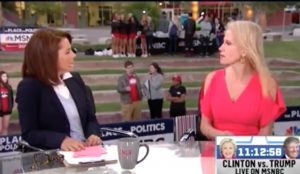 In a lengthy and combative interview on MSNBC this morning, Trump campaign manager Kellyanne Conway took offense to anchor Stephanie Ruhle’s question on how she looks at her kids at night after defending her boss’s behavior.

As the conversation shifted to WikiLeaks, with Ruhle bringing up Marco Rubio’s statement that the Hillary Clinton email leaks are an effort to impact this election by a foreign government, Ruhle then asked Conway about the multiple accusations of sexual assault made against Donald Trump. Basically, the MSNBC host wanted to know why the unverified email dumps were on solid ground but not the allegations made by at least ten women.

Conway responded by saying that Melania Trump agrees with her husband that these are unfounded claims made by the women, prompting Ruhle to respond, “Hold on — his wife agrees with the fact that he didn’t cheat on her? That’s crazy!”

Conway said it wasn’t and noted that most of the allegations occurred prior to Melania and Donald getting married and then proceeded to launch into a mini-filibuster about what was seen in the recent email leaks, including the Clinton’s campaign’s wish that the San Bernardino shooter was a white guy.

Ruhle then asked Conway, “You’re a mother, you’re a woman — are you more offended by the phrase ‘average America’ or grabbing a woman’s genitals?” When Conway verified it was the latter, Ruhle then asked her about the People writer’s story that’s been verified by several other people and why Conway still takes Donald Trump’s words over the woman’s.

Before the veteran pollster could answer, the MSNBC anchor then wondered, “You’ve got to look at your kids when you go home at night.” Taken aback, Conway exclaimed, “Stephanie, that’s not fair!” Ruhle merely responded with “how’s that not fair?”

The morning host then noted that she wasn’t going to let her kids watch the debate tonight because she couldn’t verify that the Republican presidential nominee wasn’t going to say something offensive about women.