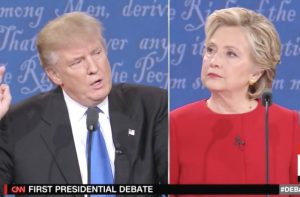 I have been struck how often in my life and career that the correct answer to a quandary is NOT what conventional wisdom would universally suggest, but actually the opposite of what every obvious impulse would advise. For instance, I never knew (until it was way too late to help me) that about the very worst way to persuade a woman to really like you, contrary to my natural instinct, is make it clear that you like her first.

It is with this reality in mind that I have been approaching this existential crisis within conservatism caused by Donald Trump, about which I have been warning/predicting for over a year now.

Currently, it appears the nightmare scenario for the Republican Party is almost inevitable. Saddled with a losing presidential candidate who is not one of their own and has no loyalties, or philosophical connection, to its preservation, the GOP is set up to lose a very winnable presidential election and the key Supreme Court seat which go with it in this cycle. But now, thanks largely to Trump’s recent implosion and decision to appeal only to his base (and thus build subscribers/”street cred” for a post-election media venture), the GOP could also lose control of Congress, as independent voters flee the party and Trump’s most fanatical fans threaten to sabotage them as revenge for their disloyalty to their fearless leader.

After the infamous Billy Bush “pussy” tape was leaked last Friday, I wrote that the only way to save any of this increasingly dire situation was for the GOP to effectively get Trump personally invested financially in the outcome of the congressional races. Based on the contentious reactions of both the GOP establishment and Trump, it does not appear that any such deal has been reached (though the firing of Trump’s Virginia campaign chairman over a planned GOP protest does leave a tiny sliver of hope).

It is my very strong belief that the two worst possible presidential scenarios for the long-term survival of both conservatism and the Republican Party as we have known it, are: Hillary Clinton winning by a smallish margin and Trump winning in something other than a landslide. Frankly, in the long term (four to eight years), while I know this is GOP heresy, I am not at all certain which of those outcomes would be more catastrophic for the country, or the cause of conservatism.

Since Trump winning at all is now seemingly approaching “The Cleveland Browns Win the Super Bowl” odds, let’s take that result (and the obvious long-term ruin it would create for the country and the party to have a completely unqualified con-man, with the temperament of a child, as our president) off the table. This leaves what, up until very recently, has been the outcome most often predicted by the “experts”: a small but comfortable victory for Hillary.

In this scenario, the following events are basically certain to follow:

All of that is just about as bad as it can get for conservatism. However, a rational look at a scenario where Trump is crushed electorally (worse than John McCain’s 2008 loss to Barack Obama should be a sensible standard) illustrates that future may not be nearly so bleak for Republicans.

Under this result, here are the likely outcomes:

Normally there would be anxiety that a larger electoral victory would provide a new president with greater powers to enact their legislative agenda, but I honestly believe that this year is unique. The narratives that Hillary is very un-liked and that Trump is a “giant meteor strikes the earth” sort of candidate are extremely well engrained in both the media and public consciousness.

Consequently, I don’t think it is naïve to conclude, as long as there is not a complete collapse of GOP support in Congress, that Hillary would be perceived as merely a “placeholder” president and not be particularly powerful. After all, when your entire campaign is, “I stink less than Donald Trump,” it really doesn’t create much of a political “mandate.”

Based on this analysis, a rational person can easily conclude that it is far better for the long-term viability of the Republican Party if Hillary wins by a large margin than if she only gives Trump a “Romney” style defeat. So, what should conservatives do under the current circumstances? Well, that’s where things get interesting.

In order for this theory to be placed into action, a block of conservatives must first accept that Hillary IS, barring a catastrophic event far beyond anyone’s control, indeed going to be the next president. This was an outcome which was highly preventable at one time, but there is NOTHING we can do to stop that now. Only an act of God can prevent this from happening and, based on the campaign so far there is no evidence he/she is even paying attention.

Once that premise is accepted, then the best path for how to proceed becomes far clearer, though hardly easy. I believe it includes at least some Republicans doing the unthinkable and voting, strategically and silently, for Hillary Clinton.

Considering the malevolent case of Clinton Derangement Syndrome which has understandably overtaken the GOP (and of which Trump, bizarrely, despite his close relationship with both of them, has taken full advantage), this is roughly like asking fans of Alabama to root for hated rival Auburn in their annual Iron Bowl football game. This was proven by the absurd, inaccurate, and juvenile reaction that Breitbart.com had when their rival Glenn Beck dared to simply suggest that he considered (and rejected) just the IDEA of voting for Hillary.

However, I have come to the conclusion that, regardless as how distasteful it may be, the only way to give conservatism any hope of surviving this catastrophe is for at least a small segment of Republicans to swallow the nasty medicine of “supporting” for Hillary Clinton for president.

To be clear, I am not suggesting that all Republicans consider taking this seemingly inconceivable action. Specifically, I’m really only asking two very specific groups to contemplate the merits of this idea.

The first is Republicans who answer polling phone calls between now and November 8th. By telling pollsters that you are a Republican who supports Hillary, you are not actually voting for her or in any way directly helping her win, but you are fortifying the correct perception that Trump cannot win and that the focus of all Americans should be on making sure there is a congressional check on an imminent Hillary presidency.

The second group is Republicans who live in the following states: Florida, Ohio, North Carolina, Georgia, Arizona, Missouri and Utah. This is a group of states where Trump could win all of them and he still would not win the presidency. Therefore, because there is no realistic path to 270 Electoral College votes for him even with all of these states, there is no fear that helping to create a loss for Trump in anyone one of them would directly help elect Hillary.

These are also all states where it would only take a very small number of Republicans flipping to Hillary (or, in Utah, one of the other viable options like conservative Evan McMullin) to ensure that Trump lost them. If Trump loses all of these already very precarious states, then his defeat is assured of being far too great for any silly claims of “rigging” or lack of establishment support being seen as its cause, except by the most delusional/insane members of his rabid following who are impervious to facts and logic.

I am well aware that I do not have anywhere near the influence to get an idea like this even started, and that I will get called all sorts of nasty names for even suggesting it. However, I am confident that it is the only strategy (at least that I have heard) which stands a chance of promoting the long-term survival of the GOP and the conservative cause. Unlike Trump, both of these once-revered entities have earned the right to not be fully abandoned until all realistic hope is lost. Desperate times call for desperate measures and there is no doubt that, thanks to Trump, this is exactly where conservatives are today.