The Clintons Attempt to Dodge Estate Taxes They Support

The Clintons Attempt to Dodge Estate Taxes They Support 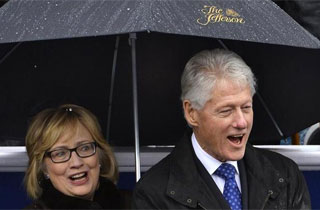 In the midst of Hillary Clinton’s Campaign to Empathize with Poor People comes a damning report about her family’s finances: though she and her husband have both called to raise estate taxes on the wealthy, they’re actively attempting to shield their own estates from that same tax — using the same tactics they publicly denounce other millionaires for using.

Bloomberg dug through the Clinton’s finances and discovered that back in 2010, the Clintons split the ownership of their multimillion-dollar New York house in half, and placed both those shares into two residence trusts. In layman’s terms, this means that any increase in the house’s value cannot be taxed and could, according to one expert, save the Clintons “hundreds of thousands of dollars in estate taxes.” (They also created a life insurance trust to lower their tax liability.)

It’s not exactly “secret offshore bank accounts in the Bahamas,” and this estate-planning maneuver’s a common strategy used among rich people to shield their estates from taxation. But the best/worst part is that in her last presidential campaign, Hillary actively pushed for expanding the estate tax:

In her last campaign, Clinton supported making wealthier people pay more estate tax by capping the per-person exemption at $3.5 million and setting the top rate at 45 percent, a policy Obama still supports. Congress decided to go in the other direction and Obama went along as part of a broader compromise. The per-person exemption is now $5.34 million.

“The estate tax has been historically part of our very fundamental belief that we should have a meritocracy,” Hillary Clinton said at a December 2007 appearance with billionaire investor Warren Buffett, who supports estate taxes and is using charitable donations to reduce his eventual bill.

Without the estate tax, Hillary Clinton said, the country could become “dominated by inherited wealth.”

Oh, and so did Bill:

As president in 2000, Bill Clinton vetoed a proposal to repeal the estate tax, though he backed less significant changes to cushion family-owned businesses and farms against the potential effects of the tax.

“If you’re serious about wanting to deal with the problems that estate tax presents, let’s get after it and solve them,” he said on Aug. 31, 2000. “But we have to proceed on grounds of fiscal responsibility and fairness.”