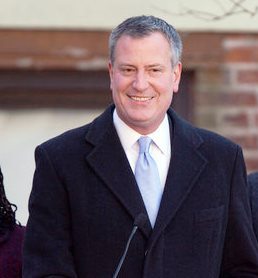 It’s hard to find anyone getting off to a more brutal start to any job than New York City Mayor Bill de Blasio has in the first seven weeks of his term.

Week after week, it’s been one ironic blunder after the other.

The comedic apex of the Mayor’s tenuous tenure came over the past 36 hours. First, there was a local CBS News crew catching de Blasio’s caravan speeding well over the limit and blowing through two stop signs on Thursday afternoon (there was no emergency at the time). This wouldn’t be such a big deal, except…Mr. de Blasio had very publicly unveiled a huge traffic safety initiative just days earlier.

The hits kept coming on Friday morning during the Mayor’s trip to Brooklyn, where a New York Post reporter photographed him jaywalking. Again, this wouldn’t even remotely be a big deal if not for the new mayor relentlessly going after jaywalkers by increasing tickets from a mere 27 through February 9th of last year (under then-Mayor Mike Bloomberg) to 215 this year under his administration. Know this: An 8-fold increase in tickets is no accident.

This rollercoaster 36 hours—where de Blasio has been getting absolutely pummeled by the New York media—is simply a continuation of a comedy of errors not seen out of New York since the Mets ended their season.

First it was not removing snow from Manhattan’s wealthy Upper East Side, which some residents charged was the lowest form of class warfare one could embark on…particularly during the one of the most brutal winter’s the city has ever seen. For those not in the know, six inches of snow fell on the city on January 20th, but wasn’t cleared between 59th and 79th Street on New York’s east side for days. Consequently, buses were stranded, traffic was miserable and getting around the area—even by foot—was extremely difficult until the plows finally came. Of course, de Blasio denied anything was done intentionally to make a political statement. For those who watch MSNBC, does any of this sound familiar?

Then there was the debacle just ten days ago when the mayor decided to send New York City students to school despite blizzard conditions outside. The choice was so ridiculous it even got the attention of Today Show weatherman/personality Al Roker, who was 5200 miles away in Sochi at the Winter Olympics.

Even fellow Democrats—both in the political arena and in the media—slammed the Mayor for making such an ill-advised call. But instead of apologizing—which apparently isn’t in de Blasio’s DNA—he doubled down…citing a National Weather Service report that apparently stated the snow wasn’t supposed to come as fast and heavy as it did. Not sure what the mayor was reading, as every weather report the night before the storm hit basically called for white death. And it came as advertised.

But mistakes will be made, especially in the early moments of anyone’s first term. The trick is how to address those mistakes in transparent fashion to assure the public things are under control. But de Blasio isn’t even getting this part of the equation right. Just check out his “press conference” Friday afternoon, where the mayor said this to reporters earlier in the day:

Later in the day, after making a brief statement where he took zero responsibility for the speeding incident, he proceeded to take zero questions from reporters before storming off. The press reaction was both harsh and hilarious. Here are three Tweets from reporters who were there that pretty much sum it up:

Did anyone clock de Blasio's speed as he dashed out of the Blue Room? @MKramerTV?

BdB's press strategy seems to be to go out of his way, not even 2 mos. into his term, to smugly alienate those covering him.

I don't get the press strategy. Does he think reporters won't have the same questions on Monday? Isn't it better to bury it on a Friday eve?

De Blasio won by a landslide after surviving the likes of Carlos Danger as a primary opponent.

Danger—whom some refer to as Anthony Weiner—once led him in the polls.

After seeing his opponent in action over his first 50 days in office, it’s now easy to see why.