The Federalist Doubles Down on Thoroughly Debunked Whistleblower Bombshell 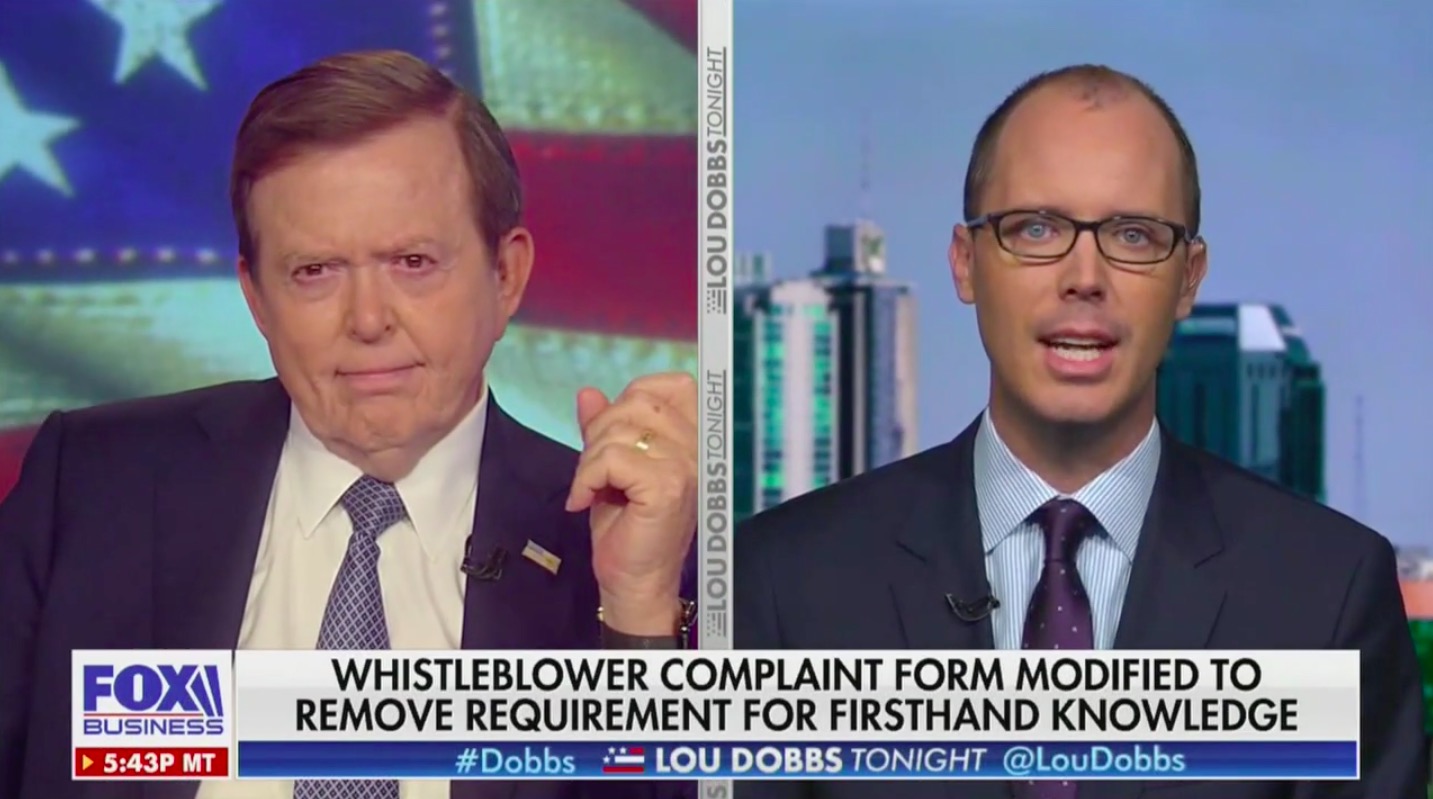 It’s bad enough when a news outlet makes a mistake in reporting something groundbreaking and is forced to correct. It’s another realm entirely for a news outlet to report something wrong – and refuse to correct or even acknowledge their error.

Call it a fake news story fit for the Trump era.

Sean Davis, an editor at conservative website The Federalist, published a story on Friday claiming that before the whistleblower complaint against Trump was made, “the intelligence community secretly eliminated a requirement that whistleblowers provide direct, first-hand knowledge of alleged wrongdoings.”

The Federalist story was quickly debunked. In fact, it had been debunked even before it was published. Cato Institute senior fellow Julian Sanchez explained to Federalist editors Davis and Mollie Hemingway that their theories about the process – which they had been expressing on Twitter – were based on a profound misunderstanding of the law.

The Federalist published the story anyway, and it was picked up as evidence of an anti-Trump conspiracy by Fox News, Republican lawmakers, and eventually the president himself. Trump linked to Davis’s story on Twitter and was still pushing the theory as of Monday:

While the theory and Trump’s absurd caricature of it earned hourly coverage on Fox News, other outlets including CNN and the Daily Beast published thorough explanations of why it was complete nonsense, and based on a misreading of a disclosure form.

Finally, on Monday night the intelligence community inspector general (ICIG) released a statement confirming what fact checks of the Federalist theory said all along: no requirement for a whistleblower to provide first-hand knowledge was eliminated, because such a requirement never existed.

There was a change in the forms because, according to the ICIG, “certain language in those forms and, more specifically, the informational materials accompanying the forms, could be read – incorrectly – as suggesting that whistleblowers must possess first-hand information in order to file an urgent concern complaint with the congressional intelligence committees.”

As Republican Senator Chuck Grassley has made clear and the Daily Beast explained: “There’s a reason the form has allowed secondhand reports all along. The requirement for firsthand whistleblowing only is completely made up.”

Sean Davis and Mollie Hemingway have doubled down on the air at Fox News and online on Twitter and the website, insisting that the ICIG statement — which was issued to clean up the mess created by their botched report, which it clearly undermines — actually vindicates their claims.

The intelligence community statement “raises explosive new questions,” Davis wrote breathlessly in his latest post, which absurdly maintained that the ICIG “admitted” it had changed its “policy” on whistleblowing.

“The level of denial exhibited here is almost heroic,” Julian Sanchez of the Cato Institute told Mediaite in an email. “As many people who understand the law have tried to explain since the Federalist’s confused story first appeared, the ‘rule’ they’re describing was not ‘changed’ because it did not exist, and would have been both extremely foolish and in tension with the requirements of the law if it had existed.”

Mediaite reached out to Federalist editors Mollie Hemingway, Sean Davis and publisher Ben Domenech for comment but did not receive a response.

Sanchez provided Mediaite with a thorough explanation of how Davis’s latest piece claiming vindication is based on a continued misunderstanding of a section of the form that was removed:

The background guidance language that’s the subject of controversy does not (and could not) impose a requirement on whistleblowers submitting an initial complaint. It was correctly removed, not because any actual rule changed, but because the guidance was poorly worded and—as the Federalist has proven—could easily be wrongly construed in a way that would deter valid reports. If they weren’t so committed to a ridiculous narrative, they might have actually had a legitimate, if very minor story: That the guidance language on one form misstated policy in a way that was likely to deter valuable whistleblower reports.

Instead, the Federalist is basically stamping its feet, insisting that a badly worded section heading MUST represent a real rule, and refusing to notice that the law, the actual form (which explicitly solicits second-hand reporting), other guidance and training, common sense, and the ICIG’s own statement all demonstrate the opposite. They’re saying that one line of text, divorced from context, must be the truth, and every other available piece of evidence must be wrong. Which is a bit like insisting that if one road sign is misprinted with an extra zero, then the speed limit on that street must really be 400 miles per hour.

Even the text after the section heading doesn’t support their argument. If you read it closely, the now-removed language, clumsy & problematic as it was, did not actually say secondhand reports could not be submitted—again, the form itself makes it explicit that can be—but instead describes the ICIG’s standard for evaluating whether a complaint would be transmitted to the Director of National Intelligence as credible following the ICIG’s own preliminary investigation, which must be completed within 14 days. It says the ICIG “must be in possession of” something more than “second-hand or unsubstantiated assertions” in order to escalate a report. In this case, as the ICIG’s letter makes clear, that was the case: Some of the information the complainant submitted was indeed first-hand knowledge, and other critical elements known secondhand, such as the contents of the now-infamous call with the Ukrainian president, were substantiated by other information gathered in the course of the ICIG’s own preliminary investigation.

At this point they’ve doubled down so hard they’re committed to claiming that Trump’s own appointee to the office of ICIG is lying about what his own office’s rules were, apparently as part of some kind of conspiracy against the president who appointed him. And they’re tying themselves in these absurd knots to avoid simply admitting they rushed a story into print without knowing what they were talking about.

Regardless of what the editors of the Federalist flood their Twitter feeds with, it should be obvious (to anyone not under the employ of Domenech and his mysterious financial backers) that Davis botched his original report thanks to a fundamental misunderstanding of how the whistleblower process works.

His original story claimed — in the lede! — that the ICIG “secretly eliminated a requirement that whistleblowers provide direct, first-hand knowledge of alleged wrongdoings.”

The ICIG statement made clear that this was never a requirement. It was never eliminated because it never existed.

Moreover, the whistleblower did claim first-hand knowledge on some of the aspects detailed — so not only is the Federalist story wrong, but its “explosive” allegations are completely irrelevant to the broader Ukraine story it sought, and they continue to seek, to undermine.