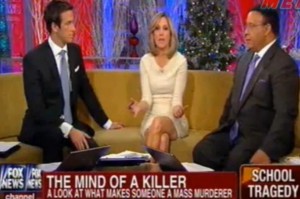 New York Magazine‘s Gabriel Sherman is under fire from the conservative media, and from Fox News’s Brit Hume, over his reporting on internal emails regarding Fox News’ weekend coverage of gun control in the wake of Friday’s horrific mass shooting. Much of that criticism is based on a story, from The Hollywood Reporter‘s Paul Bond, that purports to debunk Sherman’s reporting, but a review of what Sherman actually wrote, and how Fox News actually covered the issue of gun control this past weekend, reveals that THR didn’t check their facts, or didn’t care.

THR‘s report asserts, in its headline, that “Reports of Fox News Barring Discussions of Gun Control Are Premature,” and references Gabe Sherman’s reporting on internal emails between David Clark, Fox News Executive Producer in charge of weekend programming, and others, in which Clark says “Gentlemen, it is too soon to talk the politics of gun control. The victims’ families still don’t even have the bodies of their loved ones. Let’s leave it for another time. Thanks.”

But Bond goes on to point out that Clark’s email “was not the network-wide edict it has been portrayed as,” and that “a cursory look at the programming that Fox News aired over the weekend indicates that gun-control was a topic at least five times, including a lengthy discussion between host Chris Wallace and a Democratic lawmaker followed by Wallace with a Republican lawmaker. That segment is embedded below, and similar segments where gun control was a topic over the weekend can be seen at FoxNews.com.”

It seems as though Bond has Gabe Sherman dead to rights, unless you actually read what Sherman wrote: (emphasis mine)

According to sources, David Clark, the executive producer in charge of Fox’s weekend coverage, gave producers instructions not to talk about gun-control policy on air. “This network is not going there,” Clark wrote one producer on Saturday night, according to a source with knowledge of the exchange.

THR is rebutting Gabe Sherman’s reporting with things that Sherman, himself, reported, and confirming the accuracy of key elements, like the Clark email, in the process.

Making matters worse, at the beginning of his story, Bond writes “Fox News insiders say it isn’t true, and that, in fact, both sides of the gun-control debate were represented many times throughout the weekend’s programming,” leaving the muddy impression that the background he’s citing has been spoon-fed to him by the network, an impression bolstered by a review of how Fox News actually covered the issue of gun control this past weekend.

Aside from the references that Sherman noted in his story, and Fox News reporters explaining or playing clips of what other newsmakers were saying about gun control, here is how Fox News covered “both sides” of the gun control debate this past weekend. See if you can detect a subtle theme:

The “both sides represented” by Fox News over the weekend, then, were:

Gabe Sherman doesn’t pose the Clark email as “an edict,” but rather, as evidence of an edict, which is supported by other reporting that THR‘s “Fox News insiders” don’t bother to contradict:

According to a source, one political panelist e-mailed Clark that Bloomberg was booked on Meet the Press to talk about gun control. Clark responded, “We haven’t buried the children yet, we’re not discussing it.” During the weekend, one frustrated producer went around Clark to lobby Michael Clemente, Fox’s executive vice-president for news editorial, but Clemente upheld the mandate. “We were expressly forbidden from discussing gun control,” the source said.

Bond’s “Fox News insiders” don’t dispute these offers of fact, and according to Bond, “A Fox News representative said they are not authorized to share private emails between executives and on-air panelists and could not comment further on those exchanges.”

Bond took what was spoon-fed to him by “Fox News insiders,” didn’t insist that they provide him with a full accounting of the emails that Sherman reported on, then closed the loop with an on-the-record source.

To be clear, there is absolutely nothing wrong with a network making a public relations effort to rebut negative press, and Fox News has no duty to tell Gabe Sherman’s side of the story, or provide evidence to contradict their own. That’s the reporter’s job, and THR‘s failed at it.