The Inglourious Oscar Nominations Are In! Avatar, Hurt Locker Lead

The Inglourious Oscar Nominations Are In! Avatar, Hurt Locker Lead 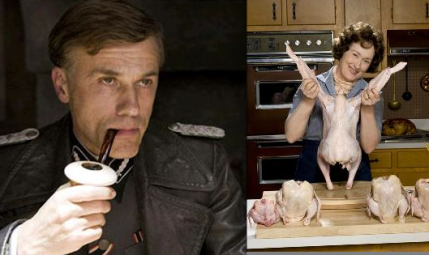 The 2010 Oscar nominations are being announced as we speak. We’ll update this post as we go. Full list is here and Jonathan Fuhrman’s smart reactions here.

District 9,
An Education,
Avatar,
Hurt Locker,
Blind Side,
Inglourious Basterds,
Precious,
Serious Man,
Up,
Up In the Air

* First impression: A lot of these films are getting nods because of their lead performances (i.e. An Education, Precious) and because the Academy now has to choose ten pictures instead of five. Also, no Star Trek? Really?

* Will Kathryn Bigelow be the first woman to win a Oscar for direction?

Actress in a supporting role:

* Alas, neither of the kick-ass women from Basterds made the cut. Also, looks like Meryl Streep is not getting the double nod, for It’s Complicated and Julie & Julia (just the latter for Best Actress). I haven’t seen Nine so I don’t know if it’s interesting that Penelope Cruz was the only one of the power women cast to make the cut here.

Actor in a supporting role:

* I think Waltz is the shoo-in here…if you haven’t seen Inglorious Basterds yet GO NOW.

Actor in a leading role:

Actress in a leading role:

* Will this be this year’s most competitive category? Sandra Bullock has the edge coming out of the Golden Globes…but Meryl Streep as Julia Child is very hard to beat. Also, Helen Mirren! You have to love that three of these candidates are over the age of forty. Sidibe and Mulligan both gave amazing debut (ish) performances but I suspect that just being nominated will be considered award enough.

* “District 9” Written by Neill Blomkamp and Terri Tatchell
* “An Education” Screenplay by Nick Hornby
* “In the Loop” Screenplay by Jesse Armstrong, Simon Blackwell, Armando Iannucci, Tony Roche
* “Precious: Based on the Novel ‘Push’ by Sapphire” Screenplay by Geoffrey Fletcher
* “Up in the Air” Screenplay by Jason Reitman and Sheldon Turner

* Nice to see In the Loop get a nod. One of the smartest films this year. But no Nora Ephron for Julie & Julia?