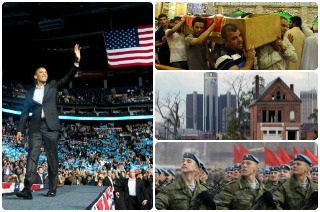 “You elected us to focus on your jobs, not ours,” President Barack Obama declared on the night he won reelection. “And in the coming weeks and months, I am looking forward to reaching out and working with leaders of both parties to meet the challenges we can only solve together.” The president ran through a list of priorities he thought the nation wanted its elected officials to focus on; “Reducing our deficit. Reforming our tax code. Fixing our immigration system. Freeing ourselves from foreign oil.” It’s safe to admit that progress on the above action items, to the extent that they have been addressed at all, has been slow. But those are merely a handful of the empty promises and threadbare assertions of progress made to Americans in 2012 which are so laughable in 2013. So much of the happy sloganeering the president and his supporters mustered in that election year are seeing their intellectual underpinnings melting away today like so much snowpack in May.

“We refused to throw in the towel and do nothing,” Obama insisted in an October, 2012, radio address to the American people touting the federal auto bailout. “We refused to let Detroit go bankrupt, I bet on American workers, and American ingenuity and three years later that bet is paying off in a big way.”

The president was referring to the automotive industry, countering the headline in a 2012 New York Times op-ed by Mitt Romney in which the 2012 GOP presidential nominee argued against bailouts for the nation’s auto manufacturers.

Of course, General Motors – the firm which Vice President Joe Biden declared “alive” today by virtue of the administration’s efforts – did undergo restructuring after they filed Chapter 11 bankruptcy, but the imagery of the president literally saving a city was simply too good delve into specifics. And the press, by and large, did not ask for them.

But some journalists did. Writing in Forbes, Paul Roderick Gregory noted a conspicuous lack of interest among members of the media in the Treasury Department’s alternatives to a federal bailout, including far cheaper options with less risk to taxpayers.

When cornered with this truth, Obama supporters will play the blame-Bush-game: “Well Bush provided government funds to keep GM and Chrysler running as he passed the baton to Obama.” Yes, but then Obama should say: “Bush saved Detroit, not me.” Strange, but I have yet to hear these words.

But Detroit was not saved, and those Obama supporters who sought to conflate the American auto manufacturing sector with the fiscal solvency of the city itself should not be allowed to get away with making the distinction between the two today.

Filing last week for the largest Chapter 9 municipal bankruptcy in American history, the city of Detroit faces a stark choice now – whether to stiff it’s many pensioners and legacy obligations or the banks and bondholders which allowed the beleaguered urban center to avoid confronting its own fiscal realities for so long.

Before the deadly attack on an American consulate in Benghazi, Libya, the president speaking on the stump would regularly declare Al Qaeda to be “on the run.” The killing of Osama bin Laden and the withdrawal of all American troops from Iraq represented opportunities for boasting – opportunities which the president and his supporters regularly took – but those, too, are proving themselves to be merely rhetorical victories.

In an attack characterized by breathtaking scale and coordination, two prisons in Iraq came under assault last week. That attack resulted in the liberation of hundreds of Al Qaeda militants and terrorist operatives. “We are concerned about the increased tempo and sophistication of Al Qaeda operations in Iraq,” a State Department official told the New York Times on Wednesday. Nevertheless, America is at a loss to do anything about this troubling development, considering the president negotiated and signed a Status of Forces Agreement with Iraq’s government which required the removal of even American military advisors.

“Iraqi forces had performed poorly and that it was clear their skills had deteriorated now that the American troops training them were gone,” reads the Times account of the aftermath of that attack. That brazen assault was preceded days prior by a wave of car bombs that took the lives of 46 Baghdadis. This assault, too, bore the hallmarks of Iraq’s Al Qaeda affiliate.

Iraq’s relative stability is a thing of the past. The strategically vital Middle Eastern state is rapidly descending into the chaos that hundreds of American servicemen sacrificed everything to stave off.

On Wednesday, National Security Agency leaker Edward Snowden received some good news. After disclosing countless American intelligence gathering practices and revealing methods which have provided foreign intelligence services with invaluable knowledge of America’s operational capabilities, Snowden might be able to settle into life as an American exile in Russia soon. His request for temporary political asylum, after committing this crime against the country of his birth, was finally being processed by authorities in Moscow.

This is just one of a series of recent provocations against the West, and the United States in particular, executed by Russian authorities. In the last several months, Russia has done its best to complicate America’s efforts to impose a cease fire or even intervene in the conflict in Syria in which more than 100,000 people have died. Russia’s efforts to foster an adversarial relationship with the West, ranging from halting American adoptions of Russian children to invading neighboring Georgia over trumped-up charges of ethnic discrimination against Russian minorities, the Romney campaign had the temerity to call America’s Cold War enemy out for being America’s “geopolitical foe.”

The chorus of scowling mockery that followed this statement of empirical fact from Obama and his supporters was, in retrospect, obscene. “He acts like he thinks the Cold War’s still on,” Biden sneered in an interview on CBS’ Face the Nation in April of last year. “I don’t know where he’s been.”

Obama took the opportunity of this volley of snide comments to mock Romney for insisting that America should have maintained a troop presence in Iraq. He was, at the time, presenting America’s withdrawal from that hard-won battlefield as a species of victory.

Nakedly exposed as fabrications are these and other hollow campaign trail statements made by the president and his campaign. That is not to say that these comments were never parsed by a handful of bright reporters and commentators at the time; they were. But the president was rarely called out for his misstatements, exaggerations, or sheer petulance masquerading as guile. Where was the mainstream political press at the time? Where are they now?