The New Yorker Addresses The Most Important Work of Our Time

The New Yorker Addresses The Most Important Work of Our Time 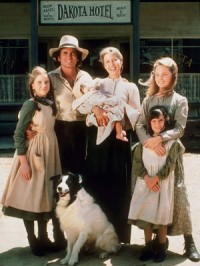 No doubt I was not the only person who thrilled to the discovery that this week’s New Yorker features a piece by Judith Thurman about Laura Ingalls Wilder, author of the Little House series of children’s books, which were loosely based on her frontier childhood in the 1870’s. Some of you may be more familiar with the 70’s television series starring Michael Landon (which sadly does not hold up to adult viewing — I have tried), which was even more loosely based on the books.

For the truly hard-core fans out there — of which I must count myself one — the article doesn’t really cover any new ground: Wilder didn’t start writing until her sixties; she had a difficult and intense relationship with her daughter Rose Wilder Lane; Lane was a well-known author in her own right, who also worked closely with her mother in the crafting of the Little House books. There has been speculation for years that Lane actually ghost-wrote her mother’s stories, a claim that Thurman addresses but does little to solve; the general conclusion being that Lane was a heavily involved editor. So there’s that. And if you’re neither a fan of the books nor the television series, than I’ve probably lost you. However if you are than you should know what really caught my attention in the end was what Thurman left out.

Here’s the bigger question: why this piece now? And going in, the answer(s) actually seemed somewhat clear at least. Just last month Jezebel writer Lizzie Skurnick published Shelf Discovery, a collection of essays based on her enormously popular Jezebel column Fine Lines, which is devoted to reviewing Young Adult classics from the 70’s and 80’s. Shortly after publication the book came close to hitting a top 500 Amazon ranking. A quick look at the index reveals title like, Are You There God, It’s Me Margaret, Tiger Eyes, Harriet the Spy, Island of the Blue Dolphins, Jacob Have I Loved, and yes Little House on the Prairie, which technically was published in the 1930’s but enjoyed renewed relevance thanks to the 70’s TV show (Skurnick refers to the LH books “As the Most Important Work of Our Time” – hence the title of this post). The other day at a Shelf Discovery bookstore reading I attended, Skurnick suggested that if she hadn’t started the Fine Lines column someone else would have, because it was just the right time for it. Which makes sense since the generation who grew up on these books is now at the age where they are having children of their own (or know a lot of people who are having children of their own, as the case may be). So classic YA books are in the air! And yet Thurman doesn’t mention Skurnick, or even spend any time in her piece dissecting why the books themselves were so popular, for that matter.

Of course New Yorker features are not necessarily timely, and as we noted the piece does focus more on the real life relationship between Wilder and Lane and the lives they lived. Which is fine, because there’s an entirely different context in which we’ve heard Laura Ingalls’ name pop up in the last year or so: Sarah Palin. Think what you will of her, Palin is the modern day pioneer woman: strident, powerful, babe in one arm, and gun (or the right to use one!) in the other. In more than one conversation I’ve had this past year with women who also grew up reading the books, I’ve heard that comparison made and made it myself to nods off recognition. And while Thurman goes so far as to note that Palin has said she loved the books, she digs no deeper. Too bad, because it is arguably the sort of thing the New Yorker does well and would have made for good reading! Instead Thurman closes by sort of blaming Ingalls for Reaganism. Alas. That said, I just got to spend 30 minutes of a slow news day writing about my favorite childhood books, so a big thank you to Thurman for that!