The New Yorker Goes Digital – But Leaves Its Iconic Covers Behind

The New Yorker Goes Digital – But Leaves Its Iconic Covers Behind

An issue of the New Yorker may be long and densely packed, but at least one only comes every seven days. It’s possible that the incarcerated manage to read every issue. I am skeptical of anyone else who makes that claim.

What happens, subscribers know, is that you build a pile of New Yorkers that you mean to get to. At some point, you get a new issue in the mail while you’re still working through the previous week’s. You’ve read about up to the film reviews, maybe, but the fresh new issue is hard to resist. So you put the unfinished one aside. A week later, that once-fresh issue joins it – maybe this time you skipped the fiction or the theater review. Then two months have passed and you have a stack of nearly ten magazines. You’re drowning, surfacing to suck in the new Talk of the Town with ragged gasps, desperate for the one-week reprieve that follows a double issue.

Over time, the covers of these magazines that sit around become inadvertently associated with moments in your life. This may sound melodramatic, but it isn’t. Seeing even an unexceptional cover can, weeks later, bring to mind the issue’s contents, or something that happened while it lay unfinished on your coffee table, or the train ride in which you read it.

The magazine is intentional about the iconography of its covers. About a third of the time, they’re topical to the political or cultural moment. Occasionally, the illustration on a cover becomes iconic. The cover at left, for example, or this one, which graces the shower curtain in my apartment, or this one, which has been duplicated forty-five billion times (estimate). For an institution rightly proud of its literary heritage, the New Yorker store is almost entirely comprised of prints of covers and cartoons.

On the magazine’s website, the covers serve as icons branding an issue. It’s a smart design decision that recognizes the ways in which readers make issues personal. That cover icon does several things: it reminds the reader of his personal associations with the issue, it acts as an advertisement for the print in the store, and it often reinforces the era (or specific moment) of the issue’s release.

An example. Diving into Calvin Trillin’s past contributions I came across this article:

Any New Yorker recognizes the significance of that cover; many may in fact remember it. Even if you can’t make out the date, you could probably place it within five years. (It’s from February 1993.) Every article in the issue shares that icon, that brand, tying them all together and to that moment, disparate though the article topics may be.

What’s most evocative, though, are the intangible personal connections people have to those covers. Which is why the magazine’s iPad app is so jarring. Despite Conde Nast’s well-publicized challenges with its tablet products, the New Yorker app is a well-executed if spartan implementation of the magazine’s content with some interactive supplements. And if you’re reading an article and close the app, when you return you’re right back where you were. Very user-friendly.

But the cover image is all-but-absent. In the view from which you select an issue to read, as at right, there it is. Once you click on ‘View’ and enter the magazine, it’s gone, rarely to be seen again. You won’t have it sitting on a table in your house for a week or two. The image becomes transitory: the wrapper to a package, cover art to an album that never leaves your CD player. Even the application icon doesn’t reflect the newest issue; instead, it’s Eustace Tilley standing watch, as he has for a century.

The next iteration of Apple’s iPhone and iPad operating system, iOS 5, will change how newspapers and magazines are presented (and bought) on the devices. Instead of a separate app, issues will appear in the Newsstand, which will, according to preview images, feature a tiny but identifiable icon of each issue, resting on a small, virtual bookshelf. 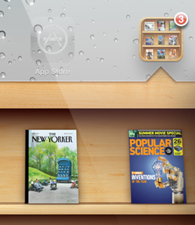 That will help – but it probably doesn’t matter anyway. New Yorker covers as icons are all but doomed. Online distribution has already scattered the magazine’s contents to the wind and diversified the content the magazine produces. For a visitor to the magazine’s website, the cover is unimportant, an ancillary to the article akin to the cartoon that the site reflexively serves up. The New Yorker, like all publications, isn’t consumed as a curated album, it’s shared as a number of hit singles, with website-only bonus tracks.

For an institution so proud of its history and content, the shift away from strongly identifiable covers will take some adjustment. Readers, for their part, will lose the associations that could have been stirred by future covers, but you can’t miss something that doesn’t yet exist. What they’re unlikely to miss is that guilt-inducing pile at their bed sides. Stacking up unread copies of digital publications, after all, is not a chore to be dealt with. It’s the way we live online.

Some readers will also miss the iconic covers because they are shopping for a new shower curtain. But those folks will have to fend for themselves.