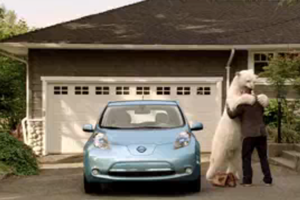 The new ad for Nissan’s electric car, the LEAF, has hit the internet, and you’d be forgiven if you confuse it with a Charmin commercial. Salon is calling it a shameless ember thrown into the fires of the culture wars that will “will send you into a Tea-Party paroxysm of rage.” It’s more of a cuddly furball thrown into the political cage match of the global warming debate that will send you into an apolitical paroxysm of cute.

The ad depicts a lonely, dejected polar bear making his way from Antarctica to suburbia in an attempt to stay away from the melting ice caps and finding himself in the garage of a LEAF owner. The bear, moved by the man’s concern, embraces him. Unlike Grizzly Man, this commercial does not end in dinner. It’s the cuddliest persuasive video on inching away from fossil fuels since that melodramatic video shown at last December’s global warming conference in Copenhagen.

Of course, for many who said “aww,” there is concern that it is too close to propaganda to not ignite some sort of backlash from global warming deniers. But those who argue this forget that Nissan isn’t trying to convince anyone that global warming is real; they’re trying to sell a car, and they know their audience. And even people outside of it– those who don’t care too much about proactive efforts to protect the environment– can have the heart to deny a hug from a peaceful, fluffy polar bear. But if this ad catches on, chances are someone will object to it as global warming propaganda, or maybe just bears in general.

Check out the ad below: