Why The Mainstream Media Gets the WTC Project Wrong 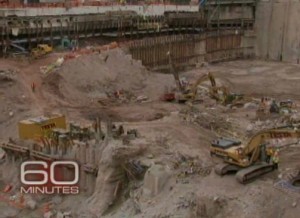 Last February, I sat in my living room and watched 60 Minutes. The story they broadcast was certain to make any American angry. They said that almost 9 years after the attacks on the World Trade Center, the site was still an empty pit. They showed video of a massive, empty construction site. A huge gaping wound in lower Manhattan.

With shocking images of an empty dirt hole, CBS Anchor Scott Pelley solemnly intoned: “8 and a half years later, we wondered… Why is Ground Zero Still a Hole in the Ground?”

There was only one problem with the story. It wasn’t true.

I’d been at the site just days before. And shot these pictures, of foundations being poured, of artifacts being prepared for the museum, of massive memorial waterfalls being tested at the Brooklyn Navy Yard. 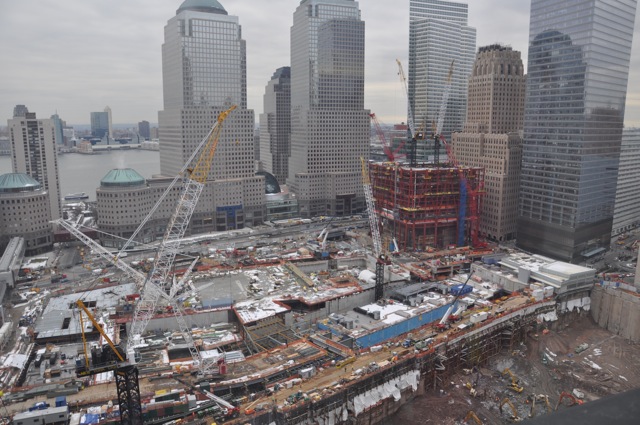 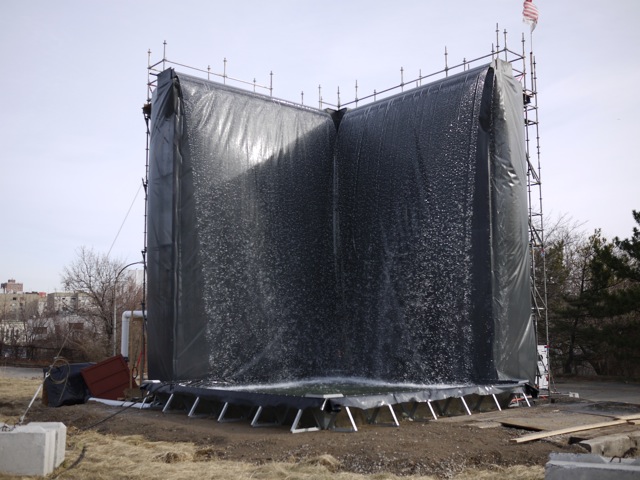 What I knew for a fact was the project that New Yorkers cared about, the 9/11 Memorial, was very much on target to open at the milestone 10th anniversary of 9/11/11.

First of all, the site isn’t a single project. It’s a massively complex series of projects – all sharing the same 16 acres of earth and sky. There’s the Memorial Plaza, and two massive memorial pools. Designed by Architect Michael Arad, the footprints of the towers have declared the space above where the towers once stood as sacred sky. There’s the Museum – a huge undertaking of curatorial complexity and underground cavernous spaces. It may be the first underground museum in the world – and in sheer volume, it is both daunting and awe-inspriing. Then there is the Transit hub – a dazzling piece of architecture by Santiago Calatrava. And that leaves the towers – 1 WTC, formerly the Freedom Tower, now rising in the northwest corner of the site, and the Silverstein office buildings known as WTC 2, 3 and 4 – with just 4 now under construction.

So when 60 Minutes pointed their cameras into the east side of the 16 acres and showed the empty pit, the chose not to focus on the memorial plaza that was forming just to the west of what they chose to show the viewer.

The larger problem the media has with the WTC site is that it’s simply too large, complex, and varied to be covered as a single project. The commercial development, like all commercial real estate, has been challenged by the double whammy of constrained lending and a tough economy. No one wants to build real estate that there isn’t demand for.

But the part of the project that matters – that the public cares about, is proceeding apace, albeit mostly out of view of New Yorkers who tend to look up to see projects rising. ‘The 911 Memorial and Museum’ is all happening at ground level and below – as the massive memorial pools are clad in charcoal-gray granite. The pools will move 400,000 gallons of water at any moment, making them the largest man-made waterfalls in the United States.

Underground – the great hall of the Museum, where the Last Column will stand, is taking shape. The Column, its signatures and remembrances preserved and protected. The Column has spent the last 8 years protected and in storage at the WTC Large Artifacts Storage Facility at JFK. Then, last August – with an honor guard of police and firemen, it was returned to the site and lowered into position. Now the museum’s walls and roof – that will act as the floor of the Memorial Plaza above – are taking shape.

Now you can look down and see the shape of what will be. The pools are formed. The Pavilion steel is taking shape. A handful of trees have been brought to the site, a glimmer of what will be once all 400 are in place on the plaza. And underground – the Museum is no longer drawings and animation – is is very much a real growing institution.

So as the media and the tourists, stand at street level and look up at the sky – they continue to miss the important and historic work that is going on. The sacred sky will remain empty – the pools, pavilion, and underground chambers are what matters. And those projects are very much on schedule. Moving rapidly toward 9/11/11 – and the public opening of the plaza and Memorial Pools.

Steven Rosenbaum is an author, documentarian, and filmmaker. His 5-year-long longitudinal study of the design, development, and construction of the National 9/11 Memorial and Museum entitled: “Engaging Absence” will be published in 3 parts. The first element, a photobook, is slated to be released on 9/11/11.

You can see 86 original images of the construction and artifacts here.