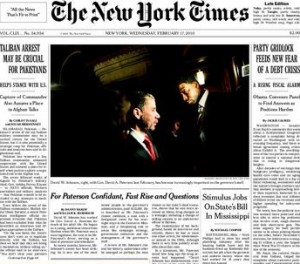 Well, I guess this is a fitting end to an absurd newscycle. The big New York Times ‘bombshell’ story about David Paterson isn’t actually about David Paterson. Ba dump! It’s about his aid David W. Johnson (described by the New York Observer last Sept. as his “omnipresent ‘body man,'”). Here’s the part the rumor mill did get right: it’s a big story. In the print version it takes up half the space above-the-fold including a large picture of Johnson with Paterson Damning by association?

The thrust of the article appears to be that the Gov. surrounds himself with shady (unelected) characters who have too much power and a not great history of being violent towards women. From the piece, which probably would have been more bombshell-ish at least had it not been preceded by two weeks of over-the-top speculation combined with a loudly disgruntled Governor. Nonetheless, it’ll be interesting to see how long Johnson keeps his job after this. Side note: It’s hard to wonder whether the story would have received the sort of front page placement it has today had it not been for the last two weeks of ‘bombshell’ rumor-mongering that turned it from a local-ish story to a national one. Talk about the tail wagging the dog. In the meantime, from the article (hint: no real need to hold on to your hats).

A review of Mr. Johnson’s rise and his history, undertaken after he emerged as perhaps the man closest to the state’s chief executive, shows that he was twice arrested on felony drug charges as a teenager, including a charge of selling cocaine to an undercover officer in Harlem.

In a statement, Mr. Paterson noted how long ago the drug arrests had happened. “David Johnson has demonstrated, over the course of his adult life, that people can change their personal circumstances and achieve success when given a second chance,” he said. “I will not turn my back on someone because of mistakes made as a teenager.”

Mr. Johnson, 37, has also on three occasions been involved in altercations with women, two of which led to calls to the police. As recently as October, the police responded to a complaint of harassment at a Bronx address of a woman involved with him. It is unclear if the altercation was verbal or physical or both, but the case is listed as closed.