The Right Hits Hard At The President While Avoiding The Gutter

The Right Hits Hard At The President While Avoiding The Gutter 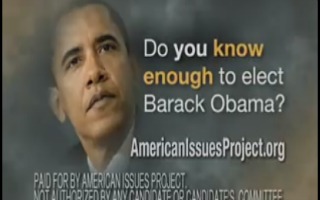 When the plans of the ‘Ending Spending Action Fund’ to tie President Barack Obama to Rev. Jeremiah Wright and other controversial issues from his past leaked in May, many political observers feared the beginning of a nasty summer and fall. They worried that Super PAC money would pollute the airways with ads about race, religion, and legitimacy; and plunge the country into a fight it would do well to avoid. But so far, GOP operatives appear to be taking at least a mildly gentler attack stance. Given the contours of the race, it may ultimately prove more effective.

Since he stepped onto the national scene, messaging against the President has proven to be at once a cakewalk and a challenge for Republicans. The Obama administration has struggled to communicate the President’s vision in the depths of an anemic economic recovery, and consequently his policies don’t tend to poll well. On the other hand, President Obama is personally well-liked and attacks on his character are likely to fall on deaf ears outside of the Tea-Party and other solidly right wing constituencies.

Two recent ads display an argument against the President that neatly fixes the problem of hitting him where he has disappointed voters without personally attacking him.  Jonathan Capehart of the Washington Post was one of the first to note the subtle intensity of this RNC ad, which says “it’s ok to make a change”, as if to comfort those who might feel guilty giving up on the President. This week, the Koch-funded Americans for Prosperity released an anti-Obama ad called “Has President Obama Earned Your Vote?” in which voters lament the disappointments of the Obama presidency and make the same style of appeal against him.

“I think he’s a great person,” one voter says before she sneaks in the inevitable caveat, “I don’t feel he’s the right leader for our country though”.

It’s one of the few messages the GOP can use to pull the remaining handful of undecided voters into their column. Ads that denigrate the President’s character, even as he personally attacks Gov. Mitt Romney, put the Republicans on shaky ground. Sen. John McCain understood the Pandora’s Box that any personal attack ads against Obama can open and largely avoided them in 2008–even the implication of race baiting or any other unfair attack on the President will not sit well with voters who are still undecided.

The argument is in the numbers: his personal favorability ratings often jump into the mid-50s, which outpaces his job approval. A RealClearPolitics average puts his favorable/unfavorable average at 49.4/45.5, while they have his job approval/disapproval at 48.0/48.8. Even more importantly, the President’s favorability among independents stands at a slightly stronger 53 percent in an ABC/WSJ poll, while Gov. Romney garners only 37 percent.

So far, it seems, pro-Romney forces have heeded those numbers and steered clear of the style of attack described in the “Rickett’s Plan”. They have distorted the President’s record on Welfare-to-Work policies and hammered his “you didn’t build that” gaffe beyond its context, but no ad has come close to the ideas Ricketts entertained. No appearances yet from Jeremiah Wright, Bill Ayers or an…

‘extremely literate conservative African-American’ who can argue that Mr. Obama misled the nation by presenting himself as what the proposal calls a ‘metrosexual, black Abe Lincoln.’

What remains to be seen is if the GOP continues to stay away from the deepest crannies of the gutter as the campaign heats up. Howard Fineman of MSNBC seems to think otherwise; he suggested on Hardball with Chris Matthews this week that “October is going to be all about race and religion”.

Despite the realities outlined above, it isn’t hard to see the campaign moving in that direction. There is already a fantastically small number of undecided voters left to sway, and you’d imagine most will have a better idea of their vote as summer turns to fall. At that point, when base turnout becomes critical, Romney supporters will have a decision to make: Do they continue to appeal to these independents with a kinder, gentler appeal to “give up” on Obama, or do they risk alienating that absurdly small sliver of the electorate in an attempt to fire up the base?

The Republican base has a harsher view of the President that is fueled by a distrust of his fundamental ideology beyond any single policy initiative. An attack on his cultural and intellectual roots would undoubtedly play better with that constituency than with waffling independents. No doubt, we’ll soon find out which path Gov. Romney’s supporters will take to get him elected, a choice that will speak volumes about how they plan to bring the country together should they capture the White House.