The Truth: Clinton Staffer Who Saw Birther Email in 2007 Called it ‘Racist and Ignorant’
Opinion

The Truth: Clinton Staffer Who Saw Birther Email in 2007 Called it ‘Racist and Ignorant’ 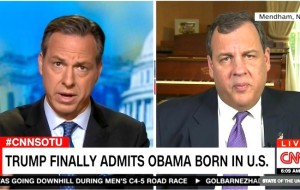 One of the lies being promoted by Donald Trump’s presidential campaign, and by Trump himself, is that Hillary Clinton‘s 2008 presidential campaign started the “Birther” conspiracy, a clain which they now try and back up with another lie, that then-campaign manager Patti Solis Doyle has “admitted” as much. Here is New Jersey Governor and Trump super-surrogate Chris Christie telling CNN’s Jake Tapper an especially egregious version of that lie on Sunday morning’s State of the Union:

Here’s a longer version of the question, in which Tapper presses Christie on yet another lie, that Trump let go of the birther issue in 2011, and Christie sticks with it anyway:

TAPPER: Well, just as a point of fact, again, Donald Trump did not accept when Barack Obama released his birth certificate in 2011. He kept up this whole birther thing until Friday. That’s five years. But we only have a little time left. So, I want to ask you…

CHRISTIE: No, but, Jake, that’s just not true. It’s not true that he kept it up for five years.

TAPPER: Sure, he did.

TAPPER: It is true.

It turns out that Christie and Trump are worse liars than previously believed, because while Solis Doyle did say the campaign fired a volunteer who forwarded an offensive email, that email wasn’t actually about then-Senator Obama’s birthplace at all, and even more to the point, the first time an actual Clinton campaign staffer saw the email, his reaction was this:

From: Ryan Callanan
Sent: Wednesday, November 21, 2007 9:49 AM
To: ‘Judy’
Subject: RE: Meet Barack Obama]
I’ve gotten this forward before. It’s racist and ignorant. I can’t believe that people believe this stuff.
Ryan

The Trump campaign also likes to point to an internal memo from strategist Mark Penn, one which was never acted upon, that suggested Obama’s worldly and diverse image could be used against him by highlighting Hillary’s American roots. What hasn’t been reported much is that the memo in question actually says this:

We are never going to say anything about his background.

That’s about as open and shut as it gets. Unfortunately, Trump surrogates are good at sticking to their lies long enough for interviewers to simply run out of time to call them out on them.