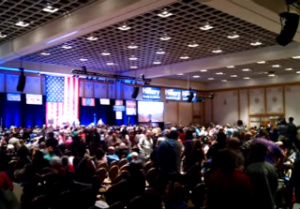 It’s no secret the majority of the media and punditocracy has long held a condescending disdain for Senator Bernie Sanders.

The majority of them came up in their careers on the sails of the cushy nexus between government, corporate America, lobbyists, and media—or, what This Town author Mark Leibovich dubbed the “Acela Corridor.”

Three of those bodies a potential President Sanders would rein in; and the fourth, well, TV news anchors make a lot of money, so they’re not as naturally inclined to love a politician who says he’ll take more of it.

It was subtle at first.

“Many Americans (i.e. me) would take pause, like the socialist label––do you think people will vote for a guy who’s a Democratic socialist?” CNN’s Carol Costello condescendingly asked actress Susan Sarandon.

Then the bias became more transparent.

Chris Matthews, who never disclosed the donations his wife’s congressional candidacy got from top Clinton allies, served as an unofficial cheerleader for Hillary Clinton, inviting her over for what looked more like a friendly sleepover than a town hall interview. He even dubbed Sanders as “the Socialist from Ben and Jerry’s country up there in Vermont.”

And this week, the entire media officially hopped on the anti-Sanders train, painting a fictitious picture of a “violent” and “chaotic” scene at the Nevada Democratic Convention where chairs were thrown, local party officials were lunged at, and lives were at risk.

I’m not going to get into the nitty gritty of why the Convention rules and leaders were so clearly rigging its outcome against Sanders: that’s part of a larger trend that the Democratic Party will have to live with as millions of disillusioned young (and older) people flee away from it.

The more important thing is how what happened last weekend was depicted. CNN, MSNBC, the Associated Press, Vox; the list goes on and on, with networks and sites uttering lines like “reports of chairs thrown by Bernie Sanders supporters at the Nevada Democratic convention.”

Mind you, in a room filled with camera phones and security, there’s been not one video or visual of chairs being thrown, which obviously would make the event description of violence a whole lot more accurate. Instead there was a video showing a disgruntled Sanders supporter lifting a chair up before another man grabbed it from him.

What ensued after was the most violent thing I’ve ever seen: a group of Sanders supporters hugging him and telling him to “calm down.”

But because this didn’t fit the anti-Sanders narrative of biased journalists––many of whom don’t even see their own biases against Sanders––it was wall-to-wall “Nevada Convention Chaos” on CNN, MSNBC, and frankly, even sites like Mediaite.

This site’s own Tommy Christopher, whose typical story selection indicates a clear favoring for Hillary Clinton, penned a counter-factual piece titled, “Video Proof Emerges That Bernie Sanders Supporters Avoided Throwing Chairs for 30 Seconds.” In it, he essentially argued just because one video shows one instance where a Sanders supporter didn’t throw a chair doesn’t mean it didn’t happen.

Actually, no. The reason there’s no evidence it did happen is because in a room filled with camera phones and security, there’s ZERO video showing it occurring––you know, what your journalism professor refereed to as… confirmation.

But wait! The often-cited-as-most-tuned-in Nevada journalist Jon Ralston reported of eyewitness accounts who said they saw chairs being thrown.

Yet, none of them, or anyone else in attendance at this chaotic, Game of Thrones-esque fight scene can come up with any visual evidence of this. All they’ve got is loud booing and screaming by angry Sanders supporters, who’ve long felt––and in many cases rightly so––that the Democratic Party rigged its primary in favor of Hillary Clinton.

Instead, the loud booing and screaming that occurred at the convention transformed on our TVs and web browsers as a violent mob scene filled with chairs being thrown and lunges coming at Democratic Party officials… just without any video of the latter.

And both NPR and Politifact have already debunked the chair throwing hysteria—so of course there’s been countless corrections, right?

Journalism 101 teaches that it’s on journalists to prove and confirm the existence of something, especially violence, before running with endless segments and columns that besmirch people, much less a presidential candidate.

Journalists who think they are performing journalism by linking to stories from other journalists who “report”––without providing proof––of chairs being thrown, are actually performing propaganda. It’s a continuation of the pass-the-often-incorrect buck journalism that’s become a fixture in the “link economy” that runs digital journalism.

The media also ran with the “Sanders supporters leaving death threats” on Nevada DNC Chair Roberta Lange’s voicemail meme. This too was speculation as there was no identifying information saying, “Hey, I support Bernie, so I’m coming for you!” But TV and digital ran like wild with it, again impugning Sanders reputation while blatantly disregarding the fact that we don’t know who left those awful messages.

The most egregious part of it all is the growing trend of clearly partisan journalists who, pretending not to be, launch false news cycles based on little actual reporting or confirmation, but instead—hysteria, speculation and eyewitness accounts that can’t be verified.

This is why outlets like mine at The Young Turks––TYT Politics––and other progressive digital media are doing so well. I’m open and honest about my political leanings that favor Bernie Sanders. It undoubtedly informs my story selection and view on what are the forgotten stories and people worth covering every day. At the same time, it in no way propels me to fudge facts or knowingly report things that aren’t true in order to help my guy or gal.

And establishment journalists hate us, because after all, we don’t bow our heads and follow the rest of the media’s herd mentality on what the story is, nor do we subscribe to the false neutrality prism that mostly lets politicians and the powerful get away with harming the people they serve.

News consumers like that type of honesty that tells audiences who the messenger is and lets them decide whether to consume that message instead of on-the-surface journalism that pretends to have no skin in the game but then goes on to skew the message.

People of all political persuasions should denounce death threats and violence in any form that seeks to achieve a political goal. But they should also denounce mob-mentality journalism that seeks to persuade an audience to believe what he or she believes without a cloud of evidence to back it up.

Or else, collectively, there’s no longer a difference between Fox News and the rest of us.

Follow Jordan at @JordanChariton and watch his reporting at YouTube.com/TYTPolitics.