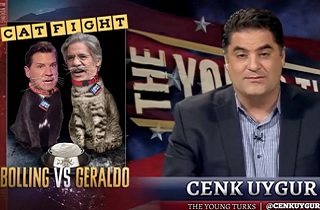 Fox News’ Eric Bolling hung up in a huff, during a Tuesday appearance on Fox stablemate Geraldo Rivera‘s radio show, when Rivera and guest Eliot Spitzer challenged Bolling’s completely false assertions about the Sept. 11 attacks in Benghazi, Libya. Liberal web and television host Cenk Uygur is taking sides in the Fox-y “catfight,” and is sure viewers will be shocked to find out whose litter box he’s defending. After explaining his reasoning, Uygur told his TYT web viewers “I’m going to rule in favor of Bolling,” adding “Am I not the fairest man in America?”

Cenk starts out by playing the clip in question, in which Bolling begins with a Whopper, and builds a meal from there.

“The U.S. armed force motto is no one left behind, leave no one behind, leave no one under fire wondering if America was going to come back and help them. That’s what Barack Obama, Hillary Clinton, and the administration did on September 11 of 2012, they left more Americans to die because they said ‘Stand down! Don’t go help,’ and that is a problem.”‘

“You just heard Eric Bolling make an inflammatory statement alleging the worst kind of conduct by the president and the secretary,” Rivera said to former New York Gov. Eliot Spitzer.

“It’s not alleging. It’s what happened,” Bolling fired back. “There’s nothing alleged about that, Geraldo.”

“What you’re alleging is an intentional failure to intervene when they had the opportunity to do that,” Spitzer agreed.

I can see where Cenk could get confused, because Bolling then lies about the lie he just told, claiming “You guys are both putting words in my mouth. I said someone gave a stand-down order, which is fact, and two Americans died because of it.”

As you can see and hear from several seconds earlier, Bolling actually did say that “That’s what Barack Obama, Hillary Clinton, and the administration did on September 11 of 2012, they left more Americans to die because they said ‘Stand down! Don’t go help.'”

Not “someone,” but “Barack Obama, Hillary Clinton, and the administration.” That’s what “they did.” “They” left Americans to die because “they said ‘Stand down! Don’t go help.'”

Geraldo then disputed the underlying factual claim that a stand down order cost two Americans their lives. “What movie are you watching? You’re making the President look like a damn murderer, Eric, and it’s so irresponsible.”

“No one said murderer,” Bolling chimes in. “Here are the facts: at X time, two Americans were killed, Ambassador Stevens and Sean Smith. Seven hours later, two more Americans were killed. In between that time, there was a verbal ‘stand down’ order given to all available assets in the area. That’s the fact.”

“The only stand down order was that four guys couldn’t get on the plane,” Geraldo says, before tossing to Spitzer, who tells Bolling that saying lies louder doesn’t make them true.

Bolling then gets louder, and says “I’m not doing this. These are the facts. You guys can look them up and I’ll talk to you about it next week,” then hangs up.

The general basis for Cenk siding with Bolling is that he feels Geraldo overreached when he said Bolling was “making the President look like a damn murderer,” which was a self-evident characterization, not an attempt to quote Bolling directly. Cenk also notes that while Geraldo said Bolling’s claim was “out of a movie, he did slip in there that four guys weren’t allowed to board a plane,” adding “that is the reality.”

“To say that Eric Bolling made it up entirely, I think, is inaccurate,” Cenk continues. “Yes, they did not send some of our guys that could have gone in, and whether they could have made a difference is a whole different question… but Bolling, in a rare instance here, wasn’t just totally making it up, and didn’t go all the way over the top and call President Obama and Hillary Clinton a damn murderer, as Geraldo suggested.”:

Whether Geraldo’s characterization was fair is a matter of opinion, I suppose, but Bolling did say that the President and Secretary Clinton “left Americans to die” because “they said ‘Stand down! Don’t go help.'”

But Geraldo also clarified his remark to explain that Bolling’s false narrative has fueled accusations of exactly that type, and if the difference here is whether Bolling was suggesting “murder” or negligent homicide, well, let’s look at Bolling’s side of the ledger.

After lying about what had just come out of his own mouth, Bolling said “”Here are the facts: at X time, two Americans were killed, Ambassador Stevens and Sean Smith. Seven hours later, two more Americans were killed. In between that time, there was a verbal ‘stand down’ order given to all available assets in the area. That’s the fact.”

This is the factual scenario that Cenk gives Bolling credit for not completely making up, but here’s what Benghazi “whistleblower” Gregory Hicks actually testified to before Congress:

Shortly after they arrived at the annex, the mortars came. First mortar round was long. It landed, actually, among the Libyans who escorted our people. They took casualties from us that night. And the next was short. The next three landed on the roof, killing Glen and Tyrone, severely wounding David. They didn’t know whether any more mortars were going to come in. The accuracy was terribly precise. The call was, the next one is coming through the roof, maybe, if it hit.

In Tripoli, we had — the defense attache had persuaded the Libyans to fly their C-130 to Benghazi. We wanted to airlift — we had — since we had consolidated at the annex, and the Libyan government had now provided us with external security around our facilities, we wanted to send further reinforcements to Benghazi. We determined that Lt. Colonel Gibson and his team of special forces troops should go. The people in Benghazi had been fighting all night. They were tired. They were exhausted. We wanted to make sure the airport was secure for their withdrawal.

As Colonel Gibson and his three personnel were getting in the cars, he stopped, and he called them off and said — told me that he had not been authorized to go.

Regardless of who gave that “stand down” order, it was given after four Americans had been killed in Benghazi, so whoever gave it could not have left anyone to die. Tragically, all of the Americans who died in the attacks were already dead when that order was given.

Whatever you think of Geraldo’s description of Bolling’s falsehoods, that doesn’t make them any less false.