Think GOP Infighting Is Ugly? Check Out The Democrats…Of 2008 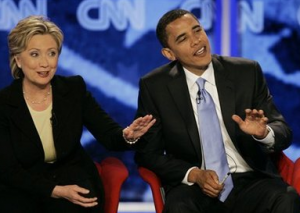 Now that the attacks have sharpened between GOP candidates, many in the media are lamenting (or outwardly championing for Democrats’ sake) the possibility Republicans will cannibalize one another and leave the nominee just a political carcass that a DNC intern could lead President Obama to victory over. Not quite.

This kind of infighting — even with negativity making up a record 95% of the ads shown leading up to the Florida primary — isn’t new to presidential politics. It was worse four years ago, which is apparently too long a time for some folks to remember what the Democratic presidential primary looked like. So here’s a reminder: Hillary Clinton didn’t just get into the muck of linking the ‘70s era terrorist organization Weather Underground with then-candidate Barack Obama, she also drew a “direct” link between Obama, Bill Ayers, and 9/11, saying during a debate:

“If I’m not mistaken, that relationship with Mr. Ayers on this board continued after 9/11 and after his reported comments, which were deeply hurtful to people in New York, and I would hope to every American, because they were published on 9/11 and he said that he was just sorry they hadn’t done more. And what they did was set bombs and in some instances people died.”

Ayers was never convicted of any crime, however he was a member of the Weather Underground group, who did accept responsibility for detonating a number of bombs in government buildings. Clinton was referring to comments Ayers made in response to regretting his violent past:

“I don’t regret setting bombs…I feel we didn’t do enough.”

Reckless, especially in the midst of 9/11? Definitely. Somehow reflective of Ayers’ relationship with Obama? Not in the least. The Washington Post fact-checked the connection between Obama and Ayers and found what Obama had stated repeatedly: aside from serving as board members of an organization together and Ayers hosting a fundraiser, they had no real relationship. Clinton was so shortsighted in her utilization of this attack that she opened herself up to a weltering retort:

“Did Hillary Clinton believe that it had been appropriate in 2001 for President Bill Clinton to have pardoned two members of the Weather Underground as he left office?,” journalist David Corn asked Howard Wolfson, Clinton’s communications director at the time.

Clinton didn’t stop her attacks at Weather Underground, though. When it came to the Rev. Jeremiah Wright controversy, she sidestepped it at first to avoid appearing opportunistic, and out of fear of angering black voters. But she wasn’t out of it for long. When she spoke with the Pittsburgh Tribune-Review editorial board in late March, as the race was heating up and the general consensus was she could actually lose, she didn’t have any qualms saying, “He would not have been my pastor. You don’t choose your family, but you choose what church you want to attend.” And just in case that wasn’t a big enough hint as to how Clinton perceived Rev. Wright’s sermons, she threw in another zinger: “You know, I spoke out against Don Imus (who was fired from his radio and television shows after making racially insensitive remarks), saying that hate speech was unacceptable in any setting, and I believe that.”

And remember this was the race that brought the term “superdelegate” into the nation’s lexicon — “designated members of Congress, governors and distinguished party leaders” who are free to change their minds on which candidate to support. Had Clinton not suspended her campaign in June (bowing to pressure from dons of the party), the superdelegates would probably have decided who the Democratic nominee was at the party convention in August, just three months before the general election. Primary voters be damned.