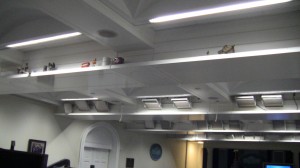 What do Wolf Blitzer, Barack Obama, a pair of gargoyles, and a London bus have in common? They all share a ledge above the James S. Brady Briefing Room, apparently warding off evil spirits along with a hula girl, an army man, a sneaker, and what appears to be a Cootie™.

Wednesday marked my two-year anniversary covering the White House, and while it goes without saying that I’m still learning new things every day, sometimes that learning is just downright weird. For example, after two years of walking into and out of the Brady Briefing Room, I finally noticed a row of odd tchotchkes lining a ledge in the ceiling as you enter.

Some of them form amusing tableaux, such as the Barack Obama bobblehead who appears to be telling a felled Wolf Blitzer cutout to stay down, or my personal favorite, Army Man vs. Child’s Sneaker. Others are just kinda there, like a pair of Associated Press souvenirs.

In order to give you a sense of placement in the briefing room, and to avoid having to do a slideshow of each one, I shot a little bit of video of this odd collection:

The guy in the video didn’t know where they came from, and what few of my colleagues were still around were as surprised as I was, having also never noticed them before.

Just as I was about to leave, one of the sound guys told me that the stuff had been accumulated there by cameramen, mostly during the Bush administration. That makes sense, those guys do get awfully bored waiting for the press office to call a “lid” (an end to the day’s press pool coverage).

I know, this is not earth-shattering stuff, but it’s the kind of quirky detail that gives the place some workaday personality, and I think it’s also pretty cool how people have worked there for years, and never looked up the two feet to notice. And not just any people, reporters.

For my part, before I left, I grabbed an umbrella and put Wolf Blitzer back on his feet (if only it were that easy for Rick Sanchez), secure in the knowledge that I had solved another of the People’s House’s many mysteries. Except I still don’t know what that thing on the end was. Any guesses? 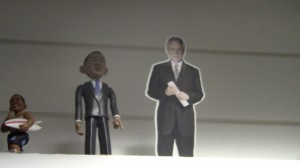