This Exists: Voice Mail Hilariously Captures Terror Of A Group Of Old Ladies Attacking Some Guy 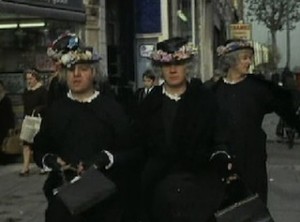 Ok, first off, let me just say that I don’t know for a fact that this is real. However, if it isn’t, it’s pretty darn funny. And, if it is, it’s absolutely hilarious. The set up is that a guy outside of Dallas, Texas was calling a coworker to say he’s going to be late when he witnessed a car accident between a guy who ran a red light and four old ladies who proceded to beat him with umbrellas, purses, and a Bible. The best thing is, the whole thing was captured on the coworker’s voice mail!

Here’s a transcription of some of the action from Hark.com:

“Oh now this guy is getting out of his car, he’s got a white shirt on with a giant cigarette hanging out of his mouth, he’s throwing his hands in the air as if it was their fault. Hold on, he’s going over to their window. She’s rolling down the window; oh man I think she sprayed him with pepper spray. His hands are on his face and he’s on his knees. She’s getting out and beating him with an umbrella. Now the other ones are getting out too. There’s one old woman with a little black purse tomahawking him. She looks like a…jackhammer. We got another woman that’s hitting him like she’s got a cattle prod. She’s got an umbrella she’s sticking it in his side. There’s another one that’s a little woman that looks like mother goose. She’s beating him! She’s beating him! She’s got a huge bag! She’s beating him. She’s got this big bag! It’s huge it’s about the size of her, she’s about 4 foot nothing.”

Oh, no! I bet the guy ran into those awesome strip club ladies from Fox News!

The cynic in me is really having a hard time with this. After all, even if the attackers are old ladies, I still don’t think a person’s first reaction after seeing a guy get pepper sprayed in the face would be to laugh uproariously. But, like I said up top, whether this is fictional or not, it’s one of the funniest things I’ve ever listened to.

Check out the audio from Hark.com below: